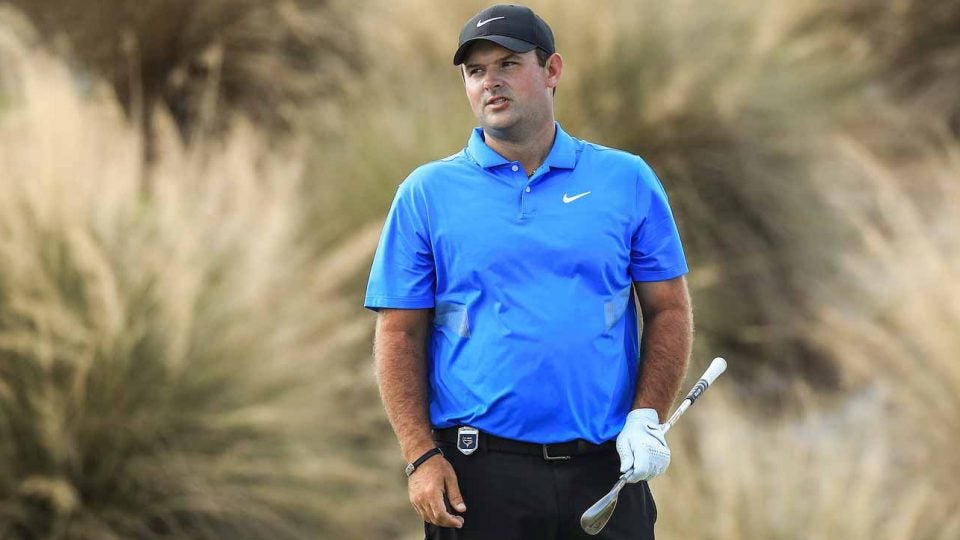 Patrick Reed was proud of getting back into contention with a Saturday 66.
David Cannon/Getty Images

NEW PROVIDENCE, Bahamas — Patrick Reed’s first 36 holes at the Hero World Challenge were pure bliss. The Presidents Cupper opened with rounds of 66-66 and built up a three-shot lead. The bliss didn’t last.

You’ve likely seen, heard and read about what happened during Reed’s third round on Friday, when he did some sand-shifting with his wedge, incurred a two-shot penalty, lost his lead and provided plenty of fodder for the significant subset of golf fans for whom Reed has become a favorite target. Even before he had finished his round and faced inevitable questions from reporters, the slow-motion video had spread like wildfire on social media.

Reed did an interview with Golf Channel before Saturday’s round, reiterating his point that he had not intentionally violated a rule for any strategic gain. Then he shot 66, finishing two shots behind winner Henrik Stenson. After his round, he spoke to reporters again, who wanted to know his reaction to the public’s reaction. For his part, Reed said he’d tried to stay away from the news.

“Honestly, I haven’t been paying attention on what’s been going on in the media,” he said. “After seeing [the incident] on camera and seeing sand move, obviously it’s a penalty. So at that point I had to accept it and move on. I mean, the last thing you can do is let it dwell, especially when you have 18 holes left to go because you still have a chance to win a golf tournament.”

In his mind, he’s done all he can do. Reed isn’t personally active on social media, which is probably a wise move. But he makes it clear from time to time that he is aware of the way he’s perceived, and he knows this latest incident won’t help. When he was asked if he’s worried about hurting his reputation, he was adamant.

“No,” he said. “Because at the end of the day I wasn’t intending to improve a lie or anything like that.”

Another reporter followed up with a blunt query. “Do you feel sometimes you got a raw deal from people?”

Reed didn’t hesitate. “Of course,” he said. “You know, of course I do, but at the end of the day you’ve just got to — you only can control what you can do, you can’t control everyone else. As long as I can go out there and do what I’m supposed to do and live life the way I feel like I’m supposed to live my life, that’s all I can control.”

The whole bit sounded rather defeatist, as though Reed feels his reputation is wholly out of his hands. He’s probably right about that, to an extent — social media is an untamable beast, and many people have already made up their mind about him — but Reed has demonstrated a knack for putting his foot in it with some regularity. The latest episode won’t help matters.

Had he not incurred the two-stroke penalty, there’s a world where Reed and Stenson go to a playoff for the Hero title. But Reed said he it would be destructive and counterproductive to do mental math like that. Instead, his focus now shifts to next week’s Presidents Cup. He loves team play, he loves match play and he loves representing the stars and stripes, so this is sure to be among the highlights of his year. But now it’s sure to be filled with more questions about his actions this week, and what they may say about his character. Reed said he’ll have no problem blocking those out.

“I’ve dealt with enough media, I’m pretty good,” he said. “There’s not really anything that’s going to be said or done that’s going to really derail me. At the end of the day when I go out there to play golf, especially next week, I’m playing with my team and for the whole country and nothing’s going to get in my way.”

Tiger Woods, the Presidents Cup captain who locked up Reed’s spot on the team with a pick last month, has every certainty that Reed is right. “Of course we’re going to be asked about it,” Woods said. “But when it comes right down to it, we’ll just get ready to play and we’ll play. Whatever Patrick has put out there, he’s focused like he is in every Cup, he just goes out and gets his point.

“Next week will be no different.”