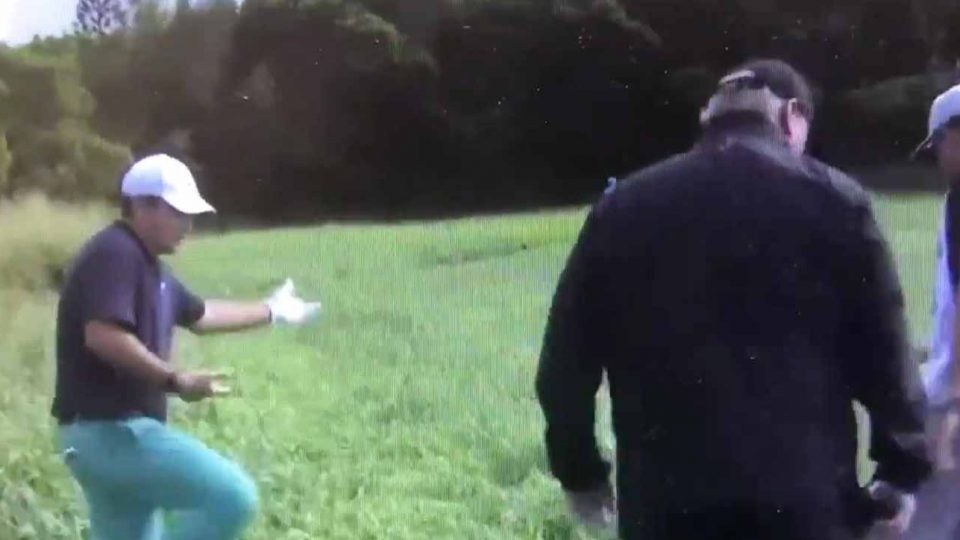 Patrick Reed consulted with a rules official when his ball buried in high grass on the 15th hole.

Patrick Reed carded a quiet opening-round 72 at the Sentry Tournament of Champions, but Friday was a different story.

While the weather took a turn for the worse, with the previous day’s sunshine being replaced by gusty wind and rain, Reed’s game turned around for the better. The seven-time Tour winner carded seven birdies in his first 14 holes, and looked like he may even have a chance to match the course record of 11-under-par 62.

But then came the par-5 15th hole, and some rules drama for Reed. After his drive found the middle of the fairway, his second shot ended up in the native area on the left side of the green. According to a Golfweek report, a search for the ball ensued, and though a volunteer found the ball before three minutes had elapsed, Reed noticed that his ball had moved, so he elected to call in a rules official.

“[The volunteer] went to separate the grass to look at the golf ball and then the golf ball moved and sank to the very bottom,” Reed told Golf Channel’s Todd Lewis after his round.

News
As the rest of the U.S. team celebrates, Patrick Reed remains marred in controversy

In the end, because the volunteer — an outside agency — caused the ball to move, Reed was not penalized and was allowed to replace the ball in its original position and play on. Reed ended up making bogey, but the seemingly innocuous situation he faced was met with skepticism from many observers in the aftermath of the controversy Reed instigated at December’s Hero World Challenge, when Reed was penalized two strokes for improving his lie in a sandy waste area.

Golf Channel analyst Paul Azinger was cognizant of the heightened atmosphere around Reed and did not mince his words on the air when explaining the scrutiny Reed will face going forward.

“It’s pretty important for Patrick Reed to get it right at this point in his career and he’s going to have to get it right for a long time to come,” Azinger said. “We’re going to watch him like a hawk with the cameras.”

Reed bogeyed the 17th hole to get back to seven under par on the day, and led the tournament for a while until Xander Schauffele took over the top spot. Reed currently trails Schauffele by one shot heading into Round 3.