Last Saturday afternoon Shannon Fish was sitting on the porch of her childhood home in Spring, Tex., about 25 miles north of downtown Houston. Along with her dad Jim and mom Yvonne, they were watching the first stirrings of Hurricane Harvey’s arrival. Shannon was due to fly out that evening for the Symetra tour’s Sioux Falls GreatLIFE Challenge. It was a wrenching decision: chase her golf dreams or stay and fight for her hometown. With the Symetra schedule winding down, Shannon decided she had to go. By the time she got to the Houston airport the air was alive with lightning. After seven hours of cancellations and delays, Shannon got one of the last flights out, arriving in Chicago at 3 a.m. She crashed at a hotel and the next day made the eight-hour drive to South Dakota. Such is life on the mini-tours. 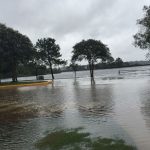 By the time Shannon arrived at the tournament, Houston was drowning. “I felt so helpless being so far away,” she says. In Spring, the misnamed Little Creek overflowed, sending water as high as the second story of houses in a subdivision less than half a mile from the Fish family home, which happens to be on higher ground and remained above the flooding. Shannon’s old high school was turned into an emergency shelter. “It’s been heart-wrenching to see all the destruction,” says Yvonne. “I can’t believe some of things I’ve seen and I pray to god I’ll never see them again.” On social media, Shannon scrolled through posts from friends at home describing their boats scraping the tops of submerged cars. “I had such a strong desire to help,” she says. “I had to find a way.” So a golfer who has made $17,802 this year in 15 tournaments took to Twitter and pledged to her 5,000 or so followers that she would donate $100 for every birdie and $500 for every eagle at this week’s tournament. “Just a drop in the bucket,” Yvonne says without irony, “but that girl has always had a big heart. And Texans help Texans. That’s who we are.”

Shannon saw a news story that listed the rescue and relief efforts George W. Bush was supporting. One was Team Rubicon, which brings together military veterans and first responders to rapidly deploy emergency response teams. Jim Fish is a Marine who served in Vietnam, and the family has always sought out military causes to support. Shannon knew right away her birdie money would go to Team Rubicon. 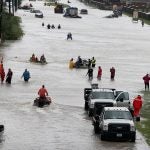 Thanks to social media, word began to spread about Shannon’s good deed, and then all heaven broke loose. Other Symetra players began to make similar pledges – at least two dozen are now on-board. Fans offered to make their own donations. Jim is an electrical contractor and Yvonne helps run the business; vendors heard about what Shannon was doing and called to say they would kick in money, too. Then tournament sponsor GreatLIFE, a health and fitness company, said it would match whatever is collected, up to $50,000. “To be honest, I’m not usually an emotional person,” Shannon says, “but when I heard that, it was waterworks.” A few days ago she was hoping to contribute maybe $1,000 of her own money. Now it’s likely that 100 times that will be raised. “I’m totally beside myself,” Shannon says. “It’s exceeded my wildest expectation. I looked it up – I’m exactly 1,069 miles from home. I’m having a hard time understanding it, how I’ve been able to help from so far away. It’s restored my faith in humanity and the goodness of people.”

Yvonne and Jim are bursting with pride, of course, but to Mrs. Fish this story is bigger than just her little girl.

“Somebody asked me today,” Yvonne says, “how the hell did you and Jim raise such a good kid? We might’ve had played a small part, but I think golf has a lot to do with it. Since she was a little girl out there toting her own bag she had to learn to behave the right way and think on her own and accept the consequences of her decisions. Golf really made Shannon who she is, and her generosity and her compassion are part of it. And to see the whole golf community come together to support her and support the people of Texas, well, it reminds you how special this game is and how we can use it to do so many wonderful things.”