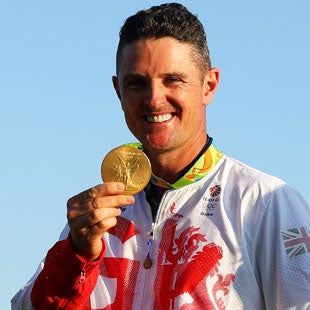 Justin Rose and Mcllroy received fans with their Chinese names on them at the 2011 Hong Kong Open press conference.
Aaron Tam/AFP/Getty Images

For the last 112 years an Olympic medal for golf has been merely a tantalizing hypothetical, but we are now 18 holes away from distribution of the hardware and a lust for precious metals has swept across the golf world. The big boy portion of the Olympic golf competition began in earnest on Saturday afternoon as Justin Rose (65) and Henrik Stenson (68) imposed their will, reaching 12 under and 11 under, respectively, to separate themselves and set up a potential duel among world-class major championship winners for the gold medal. But unlike every other tournament extant, the Olympics has a tournament-within-a-tournament that is deeply meaningful.

Overnight leader Marcus Fraser shot a one-over 72 to slip to third place at nine under. Behind the Aussie there is a pileup of stellar players who still have a shot to steal at least a bronze, notably a resurgent Bubba Watson (six under, despite stubbing a 35-foot putt that went barely two yards), Padraig Harrington (five under), Masters champion Danny Willett (three under) and, not least, Rickie Fowler (three under), who went out early on Saturday and shot 64, the second lowest round of the week. The Olympic course is loaded with risk/reward opportunity — Rose eagled two of the first five holes Saturday — which sets up a potentially thrilling final round. In the event of ties, medals will be decided in sudden-death. Here’s hoping.

For Rose, 36, the Olympics offers the chance of a career highlight that would salvage an otherwise forgettable season. Slowed by a back injury in the spring, the Englishman is winless in 2016 and hasn’t contended all summer. But this week he has been energized by wearing the colors of Britain and by the boisterous crowds, including Saturday’s galleries that were by far the biggest of the week. Rose also has been inspired by the overall Olympic experience. The highlight of the week for him has been, he says, “Being in the Olympic Village, meeting the other athletes. Just being around like‑minded people, people who train hard, work hard, who are disciplined, who obviously enjoy what they do.” As for his revitalized game, he says, “I can’t pinpoint exactly what I’ve been doing different this week. I’m probably putting just a touch better. I’m definitely driving the ball well. Iron play could probably still improve. But you know, for the most part, I’m probably just managing my game well this week.”

This increased focus has an unlikely origin: women’s gymnastics. Rose, whose wife Kate is a former gymnast, attended a meet earlier in the week and was blown away by the commotion on the floor, with so many disciplines happening simultaneously. “They have literally their body on the line if something goes wrong yet the level of distraction around them is incredible,” Rose said. “It kind of made me realize that I could do a better job of sort of tunneling in and forgetting some of the distractions that can be out there on the golf course. That’s one that I tried to use this week.”

He certainly came out firing in the third round. On the short par-4 3rd hole Rose nearly drove the green and then holed a pitch for eagle. Then on the downwind par-5 5th he reached the green with a seven-iron and buried a 15-footer for another big bird. Rose produced another highlight on the 12th, where he was short-sided but, using his putter, fed a delicate shot over a tall mound and into the hole.

Stenson’s round was more ho-hum; he played his most indifferent golf of the week yet still halved his deficit, having started the day two shots off the lead. In this season of parity, a gold medal would make Stenson the favorite as player of the year, but he’s not thinking big picture right now. “In my mind, we’re still going for one thing,” he said. “Even though the consolation prizes might be better here than some other events, it’s still the No. 1 spot that I’m looking for and I’m going to try my hardest to make that happen.”

Fraser will play alongside the 2013 U.S. Open and 2016 British Open champs in the final grouping and this plucky underdog offers an honest assessment: “They have world‑class games that I only dream of having. Not in my wildest dreams did I ever think I would come to the Olympics and compete, and now all of a sudden I have a chance of winning a medal. It feels like I’m going to wake up from this dream at some point.”

That’s the charm of this Olympic experience. There may be golf royalty atop the leaderboard but the pack of pursuers includes so many potential Cinderella stories, from Rodolfo Cazaubon (Mexico, three under) to C.T. Pan (Taiwan, four under), Gregory Bourdy (France, five under) to Mikko Ilonen (Finland, five under). For any of these players, to finish third at the PGA Championship would be a nice accomplishment that few would notice. To take any medal here will be a momentous occasion that reaches a global audience, and the final round figures to be played with an intensity that borders on desperation. “You can’t hide from it,” Fraser said of the enormity of the moment. “It’s right there in front of you, so you can’t shy away from it. I couldn’t think of any better than putting something around my neck. Hopefully that comes off, but I won’t leave anything on the table. I’ll give it everything.”

He won’t be the only one.