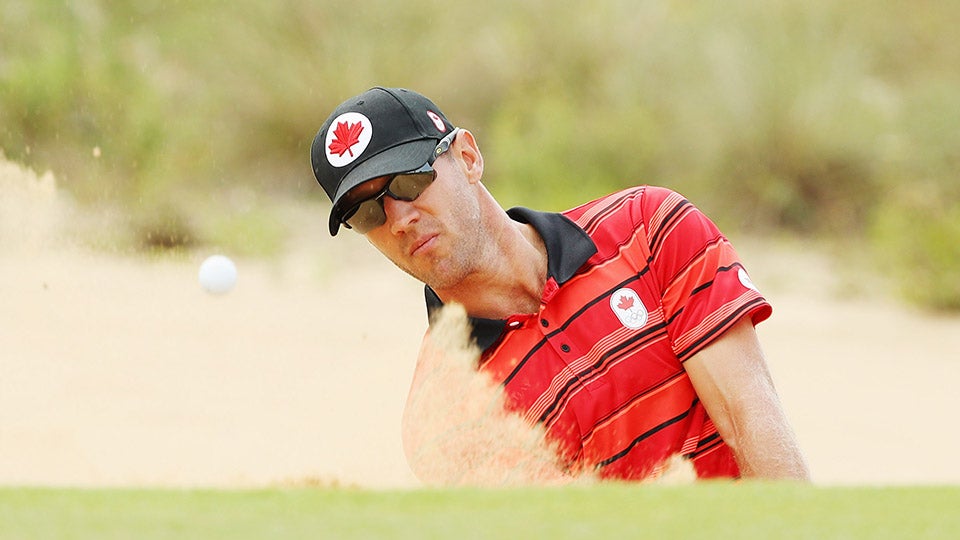 Graham DeLaet of Canada plays a bunker shot during a practice round during Day 3 of the Rio 2016 Olympic Games.
Scott Halleran

When Graham DeLaet’s newly-married caddie, Julien Trudeau, decided not to participate in the 2016 Olympic Games over Zika virus fears, DeLaet knew exactly who to call.

Whitney, who lives in Arizona and plays at the same club as DeLaet, is not a complete stranger to being on the bag, having previously carried for LPGA veteran Juli Inkster. But this will be his first world stage performance; despite his long and illustrious career (23 years, 385 goals, 1,330 games), he was never selected for Team Canada hockey in a Winter Games.

“I wanted a Canadian with me, and I was kind of running through the names and thought it would be a lot of fun,” DeLaet told the News Observer. “He’s a guy who’s got experience winning, a real positive guy who likes to have a lot of fun. That’s really what I was looking for as a rent-a-caddy for the week.”

The Canadians do have fun, but they’re also very competitive with each other. At Whisper Rock Golf Club in Scottsdale, the pair often square off — DeLaet giving Whitney a few strokes a round. Sometimes, DeLaet nearly gets beat.

DeLaet is confident enough in reading his own putts and knowing his yardage, so what will Whitney contribute in Rio?

“Obviously he’s a great athlete and he’s got a lot of experience, has won Stanley Cups and knows what it takes to win,” DeLaet said. “He’s maybe the most competitive person that I’ve ever met and I play on the PGA Tour where every person is extremely competitive. He’s got no quit in him, that’s for sure.”

Let’s just hope that doesn’t mean the dropping of bag, towel and bib, fists up to settle who’s away.

DeLaet and Whitney tee off in the first group Thursday at 6:30 a.m. ET.