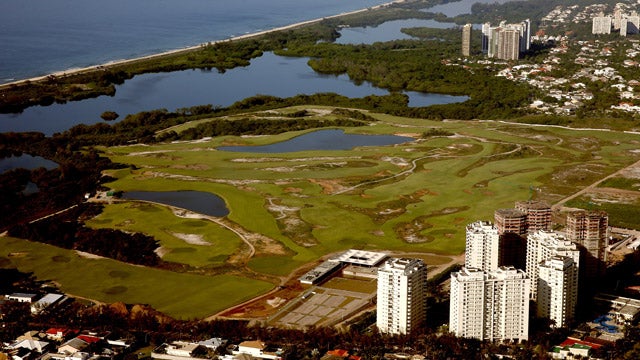 Even after all of the issues surrounding the Olympic course in Rio, Gil Hanse says he would do it all over again if asked.
Getty Images
At the outset of building the Olympic golf course in Rio, architect Gil Hanse had one bulldozer that didn’t function properly, only two of his own employees, three road trucks and six Brazilian workers who had never been on a golf course.

But somehow, the course is finished.

In a sit-down with Philly.com, Hanse reflects on the project that began in January 2013 and opens up about the difficulties surrounding the project. If you’re unfamiliar with Hanse, you should be familiar with his work. He’s renovated the Blue Monster at Trump Doral, restored Winged Foot, designed Castle Stuart in Inverness and is building Streamsong Black in Florida.

None of those courses will be as intensely scrutinized as the Olympic course in Rio.

First, the specifics of the course: it’s a par-71 track that plays 7,128 yards for the men and 6,245 for the women. It’s described as a links-styled course, and should play like one since it was built on a sand quarry, and has 79 total bunkers and water in play on four holes. As for the difficulty and course setup, Hanse says, “While we don’t want to see guys shooting 59, we also don’t want to see guys shooting 95. And it’s the same thing with the women.” At the beginning of the project, Hanse was onsite in Brazil with his wife, Tracey and daughter, Caley, where they were all supposed to stay until the work was done. Tracey and Caley left after seven months.

“I couldn’t ask them to spend another section of time, and it was pretty stressful on all of us, primarily because the work wasn’t going well,” Hanse said.

Tracey said of her husband: “He’s never been that frustrated, never before and never since.”

Among the major issues was the surrounding environment. The course is adjacent to an environmentally protected area, so the routing had to be arranged not to disturb the local wildlife and plants. Almost two years into the project, area prosecutors attempted to put a stop to the construction, but the request was denied. Hanse’s trucks kept getting stuck in the sand. The bulldozer overheated after 30 minutes of use. His local workers had no prior experience building golf courses.

What could have been a disaster has turned into a fully-functioning and beautiful course, as evident by the test event held in March. All that’s left is to sit back and watch golf being played in the Olympics for the first time since 1904. As for Hanse, he’s standing by the finished product.

“I don’t feel like we’re going to have to apologize for this golf course,” Hanse said.