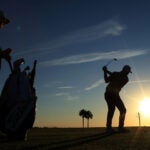 A new study computed the odds of golfers from each country reaching the upper echelon of the sport.

So, you never made it as a touring pro? Shame, because there’s never been a more lucrative time to be in the profession.

Any number of factors affect your prospects of playing golf at the highest level, from your DNA and your diligence to your knack for avoiding injury.

But let’s not forget something else that really matters: where you were born.

Commissioned by Global Odds Index, an organization that examines all kinds of probabilities in life, the Professional Athlete Index lays out the likelihood of men and women in different countries becoming professionals in three sports: tennis, soccer and golf.

For each category, researchers tallied the total number male and female athletes competing at the top tier of their sport, along with their nationalities, then factored those figures against the total number of people born in each country between 1991 and 2003. The lists of “elite” male and female golfers were taken, respectively, from the Official World Golf Ranking (as of April 2021) and the Official Rolex World Golf Ranking (as of November 2021).

Some of them bear out as you probably suspected.

In the women’s game, for instance, South Korea’s dominance is not just your perception. That country claims the largest share of elite female players, at 23.19 percent, followed by Japan (20.11 percent) and the United States (12.27 percent). As it happens, South Korea — which invests heavily in developing its junior talent — is also the country where a female player has the best odds of making it to the top tier, at 1 in 18,123 (a female golfer in the United States is a much more distant long shot, at 1 in 117,286).

Take the men’s game. While the United States produces by far the greatest share of top-tier male golfers, at 23.09 percent (the United Kingdom comes next in that category, at 10.17 percent), a male golfer in the U.S. has only a 1 in 51,346 chance of making it, the study found. The odds are significantly better in Iceland (1 in 8,762) and better still in Sweden (1 in 8,170), the country that offers the greatest likelihood of all.

There’s the top echelon of the sport, though, and then there’s the pinnacle: the top 100 in the world — i.e., the players who are really cashing in on their talents. A breakdown of those rankings reveals some other patterns.

At the very top of the men’s game, the U.S.’s dominance is even more striking. Of the top 100 male players in the world, 44 are American, which is four times that of the next closest nation: England, which has 11 pros in the top 100. Australia and South Africa both have seven players in that elite group and no other country has more than three.

On the tippy-top end of the women’s side, Korea reigns supreme, with 31 players in the top 100, meaning Korean women have the best odds of making it not only to the top tier of the game but also to the very top tier. The U.S. has the second-most women in the top 100, with 21, and Japan is third, with 13.

Arriving at such numbers is one thing. Explaining them is another. According to Christian Heidarson, data analyst for Magmatic Research, the firm that carried out the study, national prominence in a sport can be an indication of a “developed infrastructure” (with ample facilities training and other resources). It can also be an outgrowth of cultural interest that drives impassioned participation. Think of soccer in Brazil, a country that invests comparatively little in developmental programs but has long been a global power in the sport.

Brazil’s relationship to golf is another story; the odds of a Brazilian male becoming a pro golfer are 1 in 7.7 million. So if you’re hoping to someday peg it against the best, you’re better off being born in Baton Rouge.