Oakmont Club Pro Enjoys Special Round While Playing as a Marker 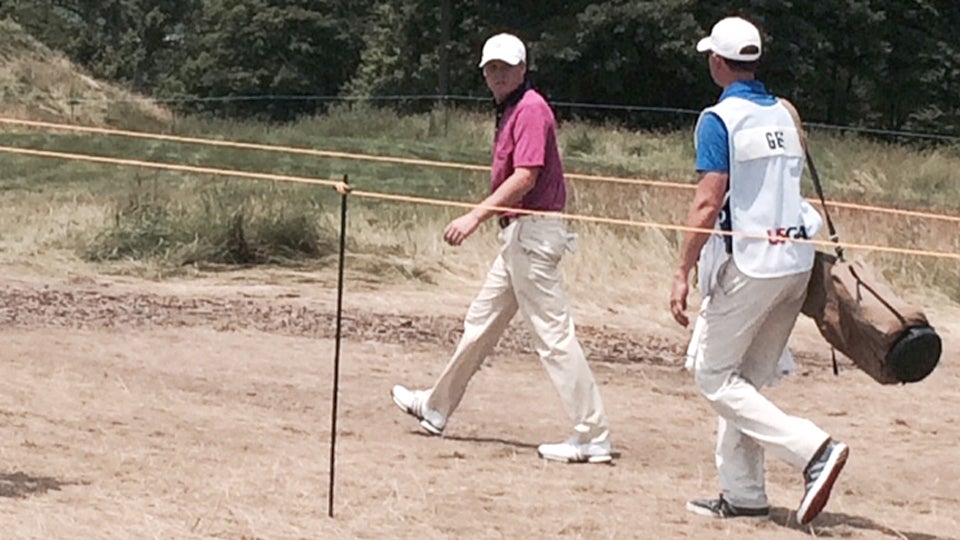 Devin Gee walks to the 17th tee with caddie Matt Denesha during the fourth round of the U.S. Open on Sunday.

OAKMONT, Pa. — Devin Gee couldn’t see the pin from the back left bunker behind the 17th green, but the sparsely filled bleachers let him know his shot was a good one.

From there, it was a two-putt bogey, a walk to the 18th tee and a warm reception on the last green. The Oakmont Country Club head pro, who played as a U.S. Open marker on Sunday morning, had a home crowd.

Gee, 30, who will take over for longtime club pro Bob Ford at the end of the year, played as a marker with Justin Hicks and had the first tee time of the fourth round, 10 a.m. Gee learned earlier in the week that he would play with the single if an odd number of players made the cut. He didn’t think about it again until he got the call late Saturday night. It was the largest crowd Gee had ever played in front of. The USGA offers the host pro of the Open an exemption into a sectional qualifier every year. Ford handed it to Gee, who didn’t make it out of the Canoe Book sectional.

But he still played in the Open on Sunday.

Gee received a nice applause from the locals on the first tee, which he said meant a lot. It also made him a touch more nervous, but he still striped it. Then he was off with his caddie, assistant pro Matt Denesha, strolling along a course he’s played more and knows better than anyone in the field. But Oakmont is no picnic. Hicks bogeyed the first hole and asked Gee on the second, “You guys like playing it like this?”

MORE: What to Know About Oakmont Club Membership

Gee didn’t play as well as he would have liked, but he kept it in the 80s. Hicks shot 81 to finish 24 over for the tournament. Gee’s name wasn’t on the traveling leaderboard (it never is for markers) and he declined to use the giant leather bag he and other Oakmont staff were given this week. He instead went with his trusty MacKenzie Walker bag, which looked like a toothpick next to Hicks’ massive TaylorMade edition. Gee’s bag blended with the dry, brown grass spectators are using.

On 18 Gee thinned a chip and lipped out a bogey putt. He tapped in for double at 1:52 p.m. Gee shook hands with Hicks and Denesha and soaked in the applause one last time. Behind the green he snapped a quick picture with Ford and said hello to a friend.

He trudged up the stairs into the locker room, and then popped out to meet a handful of reporters. Then, back to work.