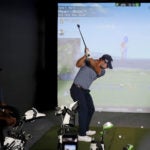 The European Tour and USGA announced new golf leagues that will be broadcast on social media.

As golf continues observing social distancing guidelines, we have seen a number of creative ways for people to get their golf fix. April was focused on what golf could be at home, in our own little bubbles. May looks like it will be trending toward a style of golf we’re more accustomed to, but with some notable differences — namely, the competitors won’t be in contact with one another. In fact, they won’t even be at the same venue as one another.

The European Tour announced today the playing of the BMW Indoor Invitational, a new series of virtual golf tournaments using Trackman technology. The event will feature European Tour players Martin Kaymer, Joost Luiten, Mike Lorenzo Vera, Lee Westwood and Bernd Wiesberger as they face off head to head in virtual competition from their own homes.

With regular events on the European Tour still suspended because of the coronavirus pandemic, the event will allow pros to compete against each other and keep their games sharp, all without leaving the comforts of their homes.

The series will consist of five 18-hole rounds to be played over the course of the next five weeks. Each tournament winner will receive $10,000 towards a charity of their choice in a community affected by the pandemic. The action will be broadcast through the European Tour’s social channels every Saturday.

The schedule of events, and their virtual host courses, can be seen below:

The USGA also announced their own virtual golf initiative, though the action will feature fans instead of pros. In partnership with the World Golf Tour, the USGA announced the Virtual Open, which gives fans a chance to compete for a VIP trip to the 2021 U.S. Open at Torrey Pines.

Qualifying for the event will consist of a round on a “Best of the U.S. Open” collection of some of the most memorable holes from U.S. Open’s past. At the conclusion of qualifying — which runs from May 4 to June 11 — the top 156 players will compete over four rounds of championship play. The championship rounds will be played on a rota including Congressional, Merion, Chambers Bay and Pebble Beach.

Ten finalists will then compete for the grand prize in an 18-hole playoff livestreamed on the USGA’s social channels on June 27. The venue will be determined by a vote from the players.

While virtual golf might be different from what we’re used to, it’s still one step closer to getting back out on the course and competing for real.

Tiger Woods' car accident: Everything we know about what happened

How golfers are like actors, according to Max Homa's acting-coach father