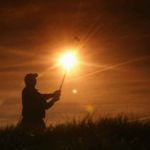 Golfers around the country have returned to golf courses, as coronavirus restrictions have been lifted.

This is the first in a five-part Bamberger Briefly series about how people are returning to golf.

Everybody has some version of this story, or will before too long. Golf made its triumphant return to Pennsylvania, where I live, on Friday, May 1. I spent the day in meditation, with particular focus on the joys of a smoother transition. Meditation is supposed to be lofty, right?

I eased back into things with nine holes on Saturday. On Sunday, I took a grown-up’s portion, 36 holes. All in, over the weekend, I played the 45 holes of the Philadelphia Cricket Club. My club, if that phase is still permitted. Eight playing partners. One lost ball. Forty-five foam donuts. No rakes. One rules violation.

Fifth hole, second round, Sunday. I tossed a ball back to its owner when it settled in gimme range. The reminder was immediate and incontrovertible: You’re not supposed to touch another player’s equipment. Last year’s common courtesy is this year’s health risk. I will not make that mistake again. For one thing, I don’t want this privilege to be taken from me or anyone else. For another, better safe than sorry.

You have to defer to the most orthodox in your group. It’s sort of like the slow play/fast play divide. A slow player cannot adjust to a fast player’s pace. Slow players lack the fast gene. But a fast player can slow down. And so it is with Covid-19 observance. In your house, in your golf group, in your grocery story, whoever is strictest sets the rules for everybody else. Anything short of that promotes chaos.

While we’re at it, golf is better without bunker rakes, as we’re playing now. Faster, for one thing. More primitive. More penal, for being someplace you shouldn’t be. More imperfect, less uniform, as the world is imperfect and not uniform. Pine Valley has no rakes. You’ll never hear somebody there yell at a ball in the air, “Get in the bunker!”

Over time, if golf eliminated the bunker rake, architects and course superintendents would use heavier sand, less resistant to footprints, more responsive to the soccer-kick smooth-out. Goodbye, country-club fluff. Hello, beach sand: pebbly, heavy, nasty, golfy. This pandemic absolutely stinks. But something good can come from it. Simpler golf would be on that list. Not high, but on it.

The Sunday morning game started at 7:15. Four players, all of us former caddies, and one current caddie, with a yardage book and good eyes. We played ready golf. If your ball touched some foam at a reasonable speed, the shot was holed. Teams were selected on the first tee. A tee was tossed for the honor. Somebody explained the new handicap system. The match finished all square at 10:35. A new season was underway.