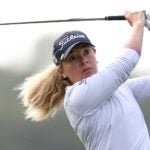 Bronte Law of England hits from the 6th tee during the first round of the Gainbridge LPGA at Boca Rio Golf Club on Thursday.

It was a rollercoaster weekend for Bronte Law, but she ended it much better than she started. After a 78 at the Gainbridge LPGA on Saturday, the 26-year-old pro shaved 10 strokes off her third round and closed with a four-under 68 on Sunday, good for a T13 finish and $29,456 payout.

Earlier in the week Danielle Kang said she didn’t believe in momentum, but Law, who was making her first start of the year, was asked the same question and said for her it’s more about making sure her swing stays consistent.

“I think sometimes you play a little bit too much, you don’t have your range time, and definitely going to make sure that I kind of can reflect and look at the swing videos from this week,” she said. “I always work toward that kind of standard.”

“Before I was just trying to find something. That’s never fun. No one wants to be in that situation,” she said. “Now I have my goals at the start of the practice session and I hope to achieve them; whereas before it was ‘I’m going to stand here until I think I’ve found something.’ As much as sometimes you have to do that, it’s never really the most efficient kind of practice because you’re working against yourself. It’s not like you’re working towards an end result. You’re kind of going, ‘Well, this is all I’ve got right now and hopefully it’s good enough kind of thing.’

“It’s nice to have that kind of different mindset when it comes to hitting balls now and I don’t have to stand there for hours,” she continued. “I will stand there until I’m happy with what I’ve got. I think that’s mostly about the mindset as well, and being comfortable with my game and not worrying too much what other people are doing.”

It’s a good tip amateurs can learn from, too: set goals and achieve them. It will make your practice more productive and, hopefully, your game sharper on the course.