A few protestors of the construction of a golf course in New Orleans are demonstrating their platform in a uniquely natural way.

The proposed site for the course is City Park, one of the largest and most-visited public urban parks in the United States, where a championship-caliber course would be built, according to a WWLTV.com story.

To voice their frustration, two protestors camped out for five days in a tree in City Park and also hung a white bed sheet painted with the words “Wild is free” from the tree. The two are fighting to prevent any trees from being taken down in the course construction process. According to WWLTV, the pair had been sleeping in hammocks and using a bucket as a latrine.

“We want kids to come here and see what nature is like, because this is, like, one of the only escapes in New Orleans for them,” said one of the protestors, who calls herself Heart.

Construction of a new course is set to begin in order to replace the existing course that was damaged by Hurricane Katrina almost 10 years ago.

The WWLTV story indicates that arrests threats have been made, and that fire trucks will be used to remove the protestors if they do not come down on their own accord. 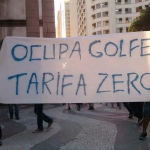 “We’re certainly not looking to take them out of the tree,” said City Park CEO Bob Becker. “They are trespassing in an active construction site. It’s not safe for them on the site or certainly in the tree, and our hope is they will have some common sense and come out of the tree.”

By midday Tuesday, Heart had come down from the tree. But her partner in protest, Lloyd, remained. No word yet on if Lloyd is still in the tree.