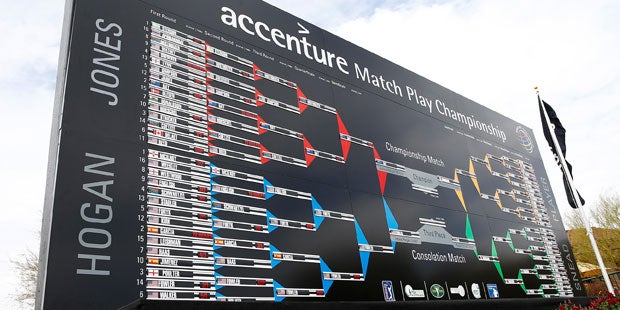 The WGC-Cadillac Match Play Championship debuts an entirely new format for the tournament in 2015. Here’s a quick recap of how things have changed.

The 64 qualifying players will be separated into 16 groups of four to begin the tournament. The top player in each group is determined based on the Official World Golf Rankings. The other three players for each group will be determined by a live draw Monday of tournament week. The winners of each group then battle it out in a classic bracket to determine the champion.

Read the full format and rules below, via worldgolfchampionships.com

“Each four-man group will play round-robin matches on Wednesday, Thursday and Friday. The player with the best record in each group advances to the Round of 16 for single-elimination match play (in the event of a two-way tie in a group, head-to-head results will be used as the tiebreaker; a three-way tie will require a sudden-death playoff). After the three days of group play are completed, the Round of 16 will be played Saturday morning, followed by the Quarterfinals Saturday afternoon. The Semifinals will be Sunday morning, followed by the Championship Match and Consolation Match on Sunday afternoon. This means that fans are guaranteed to see the field in its entirety during the first three days of competition before players begin being eliminated.”