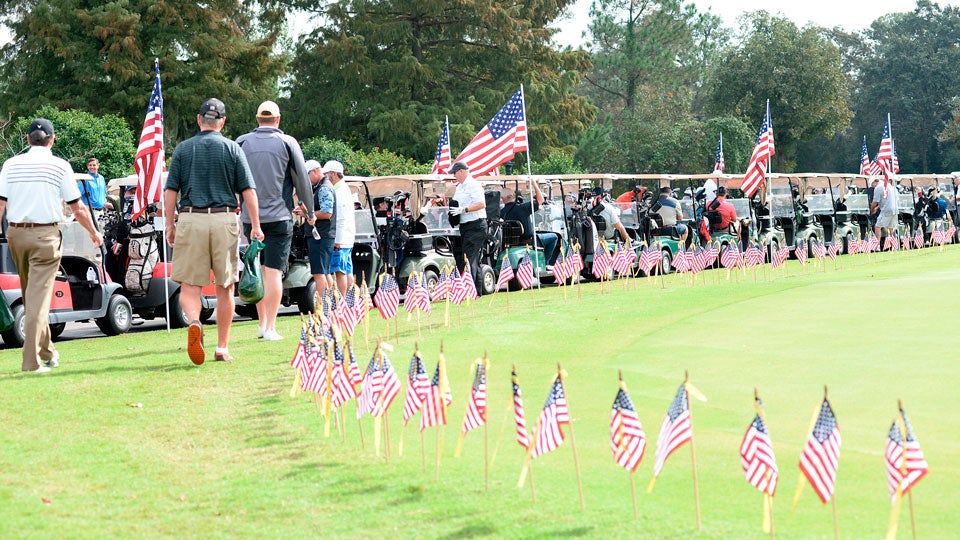 At an annual Veterans Day outing in Texas, those who have fallen while serving their country are remembered on the links.
Courtesy of Alex McIntosh

When you sign up for Alex McIntosh’s outing, you don’t just play golf. You enlist.

Before the shotgun start, each of the 220-plus participants is given a small American flag with a ribbon bearing the name of one of the 610 Texas men and women who have lost their lives in the war against terror.

The golfer plants the flag on the tee box of his or her opening hole. And then…

“I tell them, ‘You say a little something to that individual because he or she laid down their life so you could be here on this beautiful day,’” McIntosh says. “I say, ‘You’re playing for them today. That flag represents a sacrifice.’ I don’t let ’em just come out here and play golf. I make them remember.”

Remembering is what Veterans Day is all about. No one does that better than McIntosh, whose event raised $2.25 million in its first seven years and is geared up for its eighth edition on Nov. 7 at Champions Golf Club in Houston. The money goes to Folds Of Honor, an organization that provides education scholarships for children and spouses of servicemen and servicewomen who were killed or disabled.

The opening ceremony features the national anthem, a Marine color guard, a bagpiper and two buglers. After the guests and scholarship recipients are introduced, the names of those Texans who have fallen in the line of duty in the preceding year are read. There are typically 10 to 15 names.

A big soldier’s cross is set up on the range with an American flag and a yellow ribbon. Then comes the 21-ball salute. As the name of the last fallen soldier is read, 21 golfers slowly approach in single file while “Amazing Grace” is played. On the song’s last note, McIntosh’s son Eric hits the first ball. Then the other golfers follow on cue with almost military-like precision, one after another. Alex always hits the last ball, which prompts the playing of “Taps.”

It is a somber moment even if some of the golf shots would be cause for laughter on another occasion. “Trust me,” Alex says, “we’ve had a few balls not make it very far downrange because we’re nervous and emotional. But it’s all good.”

The names of the fallen include The Five, as Alex calls them. That group was killed by a suicide bomber in Iraq in 2008. Scott McIntosh, 26, an Army corporal and Alex’s other son, was one of The Five. That’s why the Scott McIntosh Memorial Golf Tournament is so special.

During the opening ceremony, a poem about Scott written by one of Alex’s friends is recited. “When that gets read,” Alex said, “the tears always start flowing.”

This is how the tournament morphs into an emotional experience and an inspirational exercise in patriotism. It’s personal.

“Scott was a great kid, the fun-lovingest kid you’d ever meet, but he wasn’t a student,” Alex recalls. “He went to college for a couple of semesters until I said, ‘Son, this is not working out. Maybe you ought to consider the military.’ I was half-joking, but the next thing you know, he enlists in the Army. It was really good for him. He needed direction in his life, and the Army gave that to him.”

Scott came home during his second deployment in Iraq for Christmas in 2007, a few months before he was killed. “He loved what he was doing, but the second deployment took a lot out of him,” Alex says. “I could tell he was in a rough situation. I don’t think he would have re-enlisted.”

The idea for a memorial outing came from Alex’s golfing buddies about six months after Scott’s death. Alex wasn’t sure if he could go through with it, but something got thrown together. An outing was held at Northgate Country Club with about 100 golfers. They downed fried chicken in the locker room afterward and hoped to raise maybe $10,000. They collected $35,000. Alex is still moved by the power of that day.

“The whole community here knew Scott’s story, and they embraced a local fallen hero whose dad was doing a tournament,” Alex says. “Texans are very patriotic, but I had no idea they would embrace us like this.”

That success gave Alex and his friends a new mission. The second year, he started the Patriot Dinner the night before the outing, for the 50 top sponsors, and brought in Leo Thorsness, a Vietnam Medal of Honor recipient, as the keynote speaker. Thorsness kept the room spellbound for an hour. Between the dinner and the tournament, which attracted 200 players, the event raised $150,000.

The formula for success was set. The dinner expanded, and speakers have since included Marcus (Lone Survivor) Luttrell and Navy SEAL Robert O’Neill, the man who shot Osama bin Laden. Now 300 attend the Patriot Dinner, and it’s a moving experience. “I don’t feel like we’ve had a successful dinner if at least half of the people aren’t crying before it’s over,” Alex says.

Alex used to broker the transportation of petroleum products and also ran a mobile document-destruction business that sent trucks along the Gulf Coast. He sold the latter for a nice gain, and that’s why he has time to focus on the dinner and the tournament, whose entry and sponsorship fees range from $400 to $7,500.

Of course, the Scott McIntosh Memorial Golf Tournament isn’t about the golf or even the money it raises. It’s about people and sacrifices.

“If you’re a parent and you lose a son or daughter, you don’t want them to be forgotten,” Alex says. “I don’t want people to forget Scott. He’s not here physically, but his spiritual presence is all over this tournament. These kids who get scholarships, a little piece of Scott will go along with them to college. That’s special for me. Scott is still making a difference.”