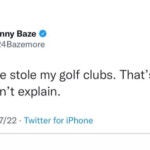 We call Kent Bazemore a professional basketball player because that’s where he makes his living. This season, he was an occasional starter for LeBron James’ Los Angeles Lakers. But that’s his day job. It’s what he’d probably tell you on the first tee during introductory handshakes. During the offseason, it’s golf season. If he’s not shooting from deep, he’s hitting it so.

He was a special guest during this year’s U.S. Women’s Open media day at Pine Needles. He has a simulator in his home. Over at @kennybaze on Instagram, among his nine most-recent pictures, five feature golf.

But Friday morning’s social media posts were not pictures of him playing with friends or of a course. First was a note. Then a photo. Neither was something you want to share, but have to.

“Someone stole my golf clubs,” he wrote on Twitter and posted to his Instagram story. “That’s a pain that I can’t explain.”

In the next slide on his story was a picture of the clubs. They were in a gray Birdiecorn Golf bag. The irons appear to be TaylorMade, and his driver has a Kobe Bryant headcover. There’s a blue Under Armour towel hanging from the bag.

And they are gone. But not lost. And here’s where you come in. if you know their whereabouts …

“Got a good check for anyone that recovers these,” he wrote below the picture of the clubs.

Go do your thing, golf community.