Mickelson details what needs to happen for him to play U.S. Open, and now we wait

Phil Mickelson closed the FedEx St. Jude Classic with a two-under 68 on Sunday, but when he plays next is anyone’s guess.

Mickelson said earlier this month he plans to skip next week’s U.S. Open at Erin Hills in order to attend his daughter Amanda’s high school graduation in California, which is the same day as the opening round in Wisconsin. Mickelson is a U.S. Open victory away from the career grand slam and has finished as the runner-up in the event six times.

After his round on Sunday, CBS Sports’ Amanda Balionis asked Mickelson what needs to happen for him to make his tee time on Thursday, which is 3:20 p.m. EST.

“I need a four-hour delay,” Mickelson said. “I need a minimum four-hour delay most likely. That’s the way I kind of mapped it out. I should get into the air right around my tee time or just prior, it’s about a three-hour-and-twenty-minute flight, and by the time I get to the course I would need a four-hour delay. Last night there was a 60 percent chance of thunderstorms on Thursday; right now it’s 20 percent. Who knows. … It’s not looking good, but it’s totally fine.”

Mickelson, who hasn’t seen or played Erin Hills, added that he plans to keep his game sharp the next few days just in case. Mickelson shot 68 in Memphis Sunday despite a triple-bogey 7 on the par-4 12th hole. He was tied for the lead at nine under through 11 holes but was derailed on 12 by hitting one ball out of bounds and another in the hazard. Mickelson finished seven under for the tournament, three back of repeat winner Daniel Berger, and in ninth place.

“I had good momentum going,” said Mickelson, who was four under on his round through 11 holes. “I was thinking, if I shoot six or seven under I can win this tournament, and I look up on the leaderboard because it’s right behind the hole on 11 and I saw I was tied for the lead and it kind of shook me to be honest. It threw me because I didn’t expect to be there; I thought I was still chasing, and it was as if I never won before; as if I was a rookie. I was not as mentally as focused as I need to be, and something as simple as that threw me. That’s the challenge I’m at right now because the physical game is as good as it’s been when I have won a bunch of tournaments but I’m mentally not as sharp. I have made some mistakes.” 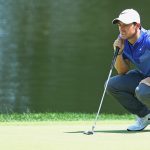 You may also like Spieth, DJ, Kaymer grouped together for opening rounds of U.S. Open