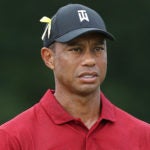 Tiger Woods sported a ribbon on his hat in honor of the Play Yellow campaign at the Memorial.

Final round viewers of the Memorial Tournament may have noticed that Tiger Woods has a small color accent accompanying his traditional Sunday outfit of red and black. It’s hardly just Tiger — you’ll notice that nearly every PGA Tour pro in the field (plus their caddies, too!) are sporting yellow ribbons on Sunday.

So what’s the story with the ribbons? Well, it has everything to do with the tournament host, Jack Nicklaus, and the causes that he and his wife Barbara continue to support through their Play Yellow campaign. The Nicklauses have focused their charitable efforts over the years on children’s health, in particular the Children’s Miracle Network Hospitals (CMNH).

Before there was Tiger in red, there was Jack in yellow. The Golden Bear took to wearing “lucky yellow” after one meeting with a boy named Craig Smith. Here’s how my colleague Evan Rothman described the meeting:

“At age 10, Craig, the son of the minister of Barbara Nicklaus in their hometown of Columbus, Ohio, was stricken with Ewing sarcoma, a rare bone cancer. The boy was a huge Jack Nicklaus fan, and Nicklaus would often call Craig to check in; during one such call following a victory, Craig told Nicklaus he knew in advance that Nicklaus would win became he was wearing his ‘lucky’ yellow shirt.”

Smith died just three years later at the age of 13. But the Nicklauses have been honoring his legacy ever since. Most recently, after a meeting with PGA Tour commissioner Jay Monahan at their West Palm Beach home, they launched the Play Yellow campaign in conjunction with the Tour and Children’s Miracle Network Hospitals — a network of 170 hospitals across North America and relies upon donations to fund pediatric care that insurance programs don’t cover.

Fans watching the tournament from home can purchase Jack’s official “Play Yellow Ahead” hat and branded “Play Yellow gear,” as well as make a donation to their local children’s hospital by clicking here.

You can find out more about the Play Yellow campaign here.

In support of the Nicklaus Children’s Health Care Foundation initiative, Raymond James will match up to $20,000 in donations. You may donate here. To learn how to support Covid-19 relief through the NCHCF, click here.