MELBOURNE, Australia – It wasn’t that long ago Matt Kuchar was hogging the headlines in golf. The fallout from the El Tucan caddie fiasco lasted from the Sony Open in Hawaii, in January, to the Genesis Open in mid-February.

Kuchar faced backlash again in March when he and Sergio Garcia disagreed on a conceded putt during their quarterfinals match at the WGC-Match Play in Austin. Then, in May, there was Kuchar’s attempt to get relief from a pitch mark following a tee shot during the Memorial Tournament – which even raised an eyebrow from tournament host Jack Nicklaus.

But if you thought Kuchar might cop it from some of the Australian crowds at Royal Melbourne when the Presidents Cup kicks off, think again.

It seems Patrick Reed’s waste bunker saga has swallowed up the energy of superfan group, the Fanatics. The Fanatics are a group of Australian sports fans who don trademark green-and-gold attire and travel across the globe to cheer on their own athletes at major sporting events. At the Presidents Cup, they are known for providing atmosphere. But they won’t be using Kuchar’s PR headaches as ammunition.

“We don’t really have anything in store for ‘Kuch’ at this stage,” Fanatics member Tony Di Carlo told GOLF.com.

Turns out, nine-time PGA Tour winner Kuchar has built a rapport with the Fanatics during the past four Presidents Cups – despite being part of an American team which has given the International team a beating every time. He even celebrated with them in 2011 when the Internationals were handed a 19-15 drubbing.

“We have had a good relationship with (Kuchar) over the last few years,” Di Carlo continues. “I don’t know how many Australians would remember the Kuchar stuff from earlier this year. It’s not as though we’re going to be singing, Money, Money, Money by ABBA on the 1st tee.

“We are a light-hearted group and we want to be more about promoting a good atmosphere than harping on the negatives. Plus, some of the American players can thrive under pressure. Getting stuck into them can backfire and you don’t want to inspire them to go to another level.” 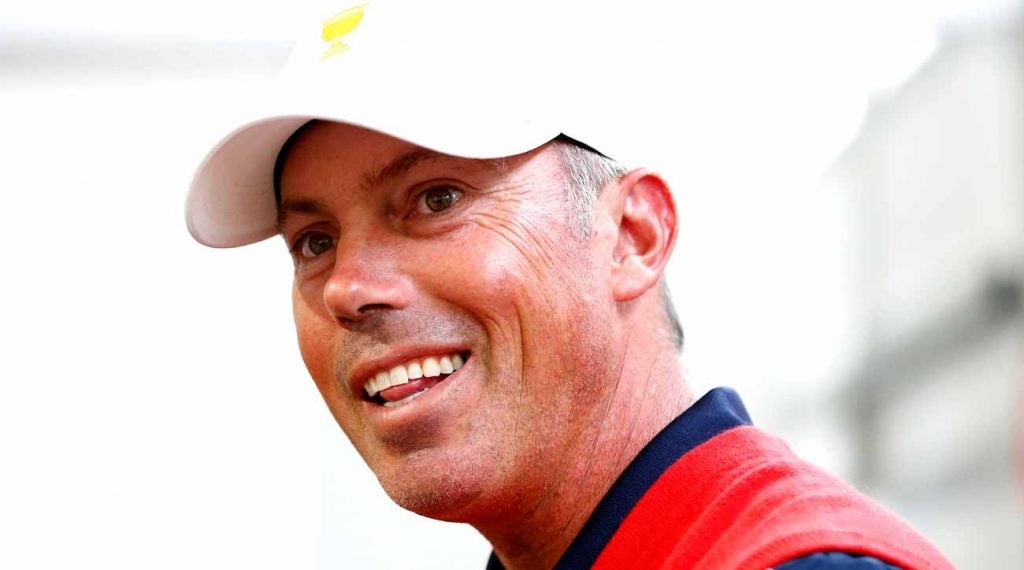 After Reed’s rules controversy at the Hero World Challenge in the Bahamas, Australian members of the International team – Marc Leishman and Cameron Smith – were critical of Captain America’s actions and subsequent explanation. The pair said they expected the Royal Melbourne crowds to “give it” to Reed.

The Fanatics do have some chants prepared for Reed, but insisted they were “fun.” It has been suggested the group will rewrite the lyrics of It Wasn’t Me by Shaggy.

“We have had a crack at a couple of songs. We will have a little dig at (Reed),” Di Carlo says. “We will come prepared. But we don’t it to be malicious; it’s all a bit of fun.”

The Fanatics admitted a last-minute practice session for their chants may spawn new ideas. The group were meeting on Wednesday night in Melbourne.

However, world No. 24 Matt Kuchar won’t find out if they have concocted any material until Friday, given Team USA captain Tiger Woods left him out of Thursday’s fourball session. Kuchar and Rickie Fowler were the two Americans to be omitted, with Cameron Smith and Haotong Li rested for the International team by their skipper, Ernie Els.

But Kuchar doesn’t expect any needling from the Fanatics, given he has taken time to get to know the group over the years. In fact, it’s a love-in between the two parties.

“You always try to treat people the way you want to be treated,” Kuchar tells GOLF.com. “I’m a fan of golf; I grew up dreaming of being inside the ropes.

“With the Fanatics, I think all of us appreciate having people come out who are passionate for the game. They do a great job of cheering and adding energy and some excitement.

“It’s not all the time that we play in front of tens of thousands of people. It’s fun. Their chants are clever. The songs are good fun and good for the game”