Matt Kuchar doesn’t have social media, which means he’s able to ignore most of the daily criticism lobbed in his direction. But the same isn’t true of his grandmother, who has seen the tenor of the conversation around Kuchar change during a controversy-ridden 2019.

To recap, in brief: Kuchar stiffed local caddie David “El Tucan” Ortiz, paying him just $5,000 after winning $1.3 million at Mayakoba. He won a hole in controversial fashion at the WGC-Match Play by calling out Sergio Garcia for scooping up a putt before it was conceded. He went through an extensive back-and-forth with several rules officials (and Rickie Fowler!) at the Memorial. For Kuchar, 2019 has marked one of his best stretches of golf ever — but his nice-guy perception has shifted, too.

Kuchar hasn’t been immune to the critics. They were particularly vocal right after the caddie-tipping news broke at the Genesis Open. And they’ve continued, at events and even more so on social media.

“Sure, it was difficult,” Kuchar said in the lead-up to this week’s Scottish Open. “I don’t do ­social media, so that helped to not see much. However, the things my grandmother was hearing and talking to me about was really tough.

“I’ve kind of always been that kid who had made my parents and grandparents proud and to see them hear some of the things said about me was a position I never wanted to put them in, and that was very, very difficult.”

Kuchar said he didn’t ask for examples, just that his grandmother said she couldn’t believe what people were saying about him. He said he tries to keep his head in the sand, for better or worse.

“I do a good job — or bad — not reading my own clippings, not reading any clippings. Just kind of good or bad, I feel like you can get pretty lost pretty quickly following a lot of what’s out there. So I don’t do it.”

Still, Kuchar has friends who will fill him in on the discourse surrounding his actions and public perception.

“I’ve got a pretty decent idea from other friends telling me, you know, ‘I can’t believe what this guy said,’ or ‘This guy really threw you under the bus.’ There were some things.” 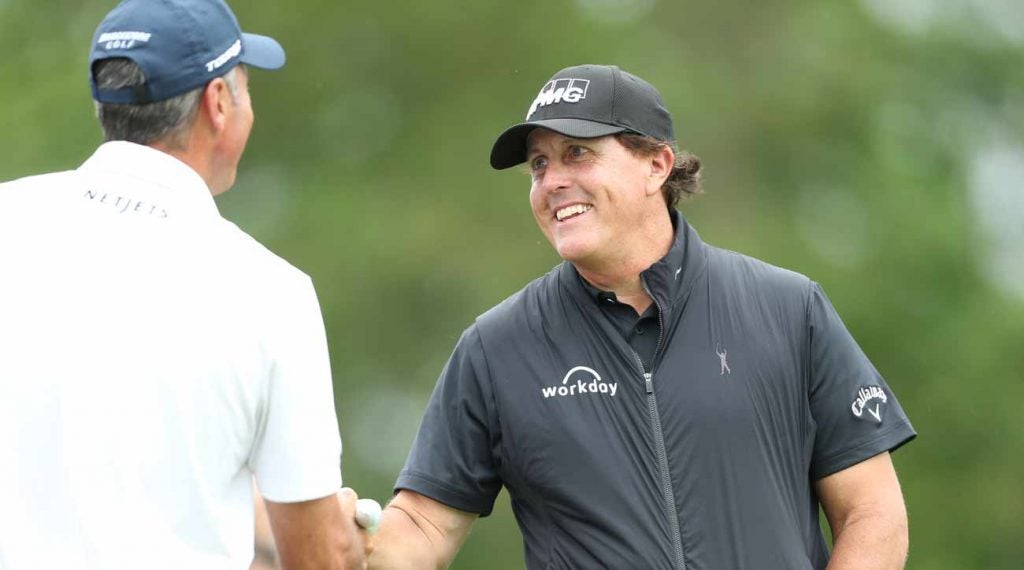 Phil Mickelson and Matt Kuchar played together at the Masters.
USA Today

When asked who he has turned to for advice, Kuchar mentioned a left-hander who’s no stranger to controversy (and who took a good-natured shot at Kuchar at Augusta, too).

In all, Kuchar sounded fairly zen about the developments, and insisted that he’s continued to learn from how he handled the critical spotlight.

“The caddie thing was a tricky situation. I feel like the difficult situations you get in turn you into — you learn from those situations. You don’t learn from victories very often. You learn from your setbacks, and I think that’s something where I’ve certainly learned from.

Instruction
The Etiquetteist: 7 things to know when tipping at the course

Kuchar, who has ascended to No. 13 in the world, will play Thursday and Friday alongside Graeme McDowell and Lucas Bjerregaard at the Aberdeen Standard Investments Scottish Open, the final tune-up before the Open Championship begins next week.