‘Must be good to be the king’: Former MLB All-Star shares story of Michael Jordan cleaning up in Blackjack 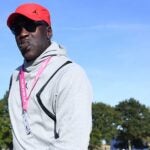 Lots of the time, it's good to be Michael Jordan.

Mark Grace, as the long-time Chicago Cubs first baseman, was well known in the Chicago area. However, he wasn’t as well known as Michael Jordan.

Grace, a three-time MLB All-Star who also won a World Series with the Arizona Diamondbacks in 2001, has turned into quite the golf nut since his playing days. He joined GOLF’s Subpar Podcast to talk about what it’s like playing with comedian Bill Murray and what he’s learned in a handful of trips to Augusta National, but he also talked plenty of baseball and lots else.

One non-golf story that came up involved running into the Bulls legend at a Chicago-area casino.

As Grace tells it, his parents came to visit on an off day, and they decided to go gambling on a riverboat casino. This particular casino had three levels, and the second level, which was reserved for Blackjack, was completely roped off.

“There are at least 70 Blackjack tables on this boat that are not being used,” Grace said. “One is, and that’s where Jordan is playing.”

Jordan was the only one playing on the entire floor, and he was alone, Grace said. After speaking to a few bodyguards to ask if he could go say hello and introduce his parents, Grace eventually got through. Turns out, Jordan was having himself quite the heater.

Grace said hello and they chatted a bit. Then they stood and watched.

Grace said that Jordan was very gracious to his parents. He told MJ good luck the rest of the way, and on the way out Grace stopped and chatted with the casino host.

No word on how Jordan finished that night, but he put on quite a show for Grace.

You can check out the entire podcast below.