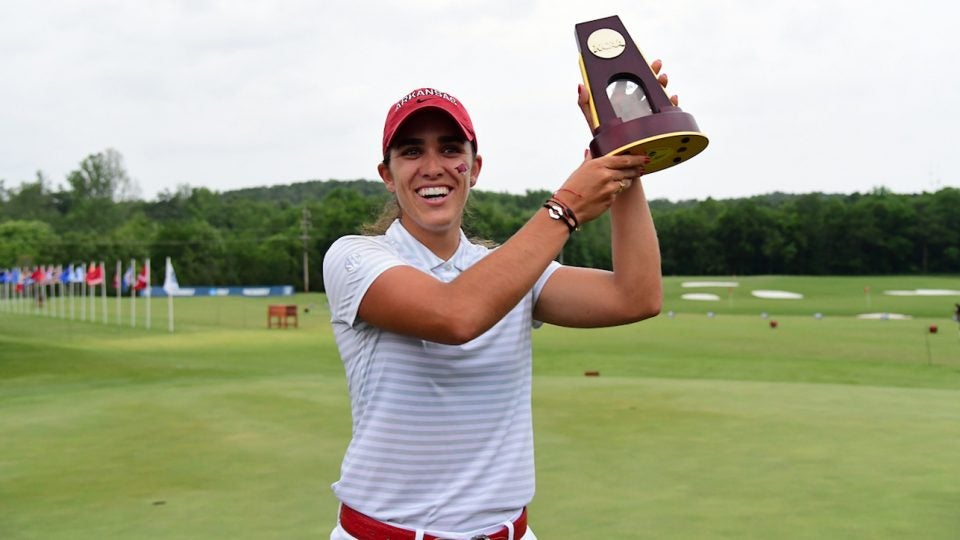 Maria Fassi broke onto the national golf scene earlier this spring when she finished second to Jennifer Kupcho at the first-ever Augusta National Women’s Amateur ahead of the Masters. Now she has another accomplishment to add to her already stacked resume: NCAA champion.

The Arkansas Razorbacks senior shot a bogey-free five-under 68 during Monday’s final round to win the NCAA Championship at Blessings Golf Club in Fayetteville, Ark., finishing at eight-under for the 54-hole tournament. Fassi, who trailed entering the final round, racked up three birdies on the front nine to take a one-shot lead at the turn. She tacked on two more birdies on the back nine to win the title by four strokes.

The win makes Fassi the second Razorback to win the national title. LPGA Tour pro Stacy Lewis won it for the Hogs in 2008. Fassi, along with Kupcho, earned her LPGA card for this year through Q-School last fall but deferred her membership to return to school.

“I’ve told coach (Shauna) Taylor many times that we were going to be walking down the fairway on 18 holding hands and that I would be the national champion,” Fassi said after her win. “It was way better than what I have imagined. Coming back to play for a national championship was one of the main reasons that I deferred my professional status. I think I’ve had a nice last couple of months, playing Augusta, winning the SECs and advancing to the national championship.”

Fassi’s Arkansas team is having a pretty good week too, as the Razorbacks will compete in the match play portion of the tournament for the first time ever after placing in the top eight following the third round.