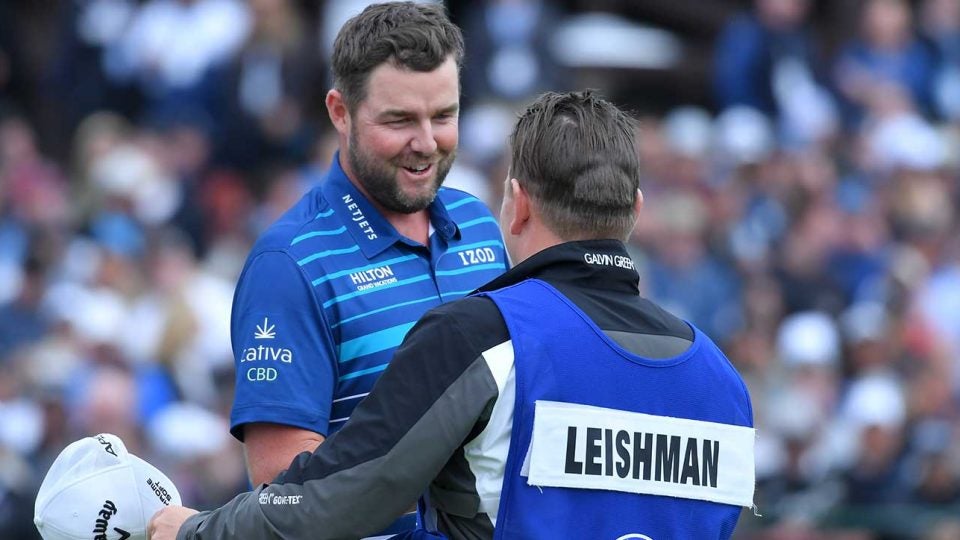 A ton of big names made their 2020 debut at the Farmers Insurance Open on Sunday, including Tiger Woods and Rory McIlroy. But did they have enough firepower to chase down 54-hole leader Jon Rahm? Here’s what happened on Sunday at Torrey Pines.

How it happened: Rahm began the day with a one-stroke lead after a Saturday 65, but Rahm couldn’t get off to the same Sunday start as Australian Marc Leishman, who opened birdie-birdie and was five under on the front nine. Leishman got to 13 under at the turn, which at the time put him ahead of seven others stuck at 10 under — McIlroy and Patrick Reed among them — and kept it up on the back nine. He birdied the 11th, and even when Brandt Snedeker eagled the 13th to the cut the lead to two, Leishman birdied 15 and Snedeker fell back with a bogey two holes later, making the deficit four strokes. Leishman gave away a stroke with a bogey on 17, but got it back with a birdie on 18. That last one proved crucial, as Rahm finished on a tear but came just short. Rahm was three over on the day through 12 holes, but he played the last six in five under. That included an eagle on 13 and birdie on 18. His tying-eagle attempt on the 72nd hole couldn’t fall to force a playoff.

Why it matters: It’s the fifth PGA Tour win for the 36-year-old Leishman and fourth since 2017.

Worst break: After opening with a bogey on the par-4 1st hole, Woods hit a perfect approach from 141 yards to the 2nd green — although it wasn’t quite perfect enough. Instead of an eagle he tapped in for birdie. Check it out for yourself.

⛳️ @TigerWoods nearly holed out from the fairway.

The ball went IN the hole ... and came back out. 😳 pic.twitter.com/ikm21gLSju

Notables: McIlroy tied for 3rd at 12 under, three behind Leishman. Bubba Watson and Patrick Reed were T6, and Tiger Woods (70) was T9.

Up next: The PGA Tour heads to the Waste Management Phoenix Open next week at TPC Scottsdale. Rickie Fowler returns to defend his title. Jordan Spieth, Rahm and Matt Kuchar also headline the field.