Mackenzie Hughes’ Near 59 Gives Him Early Lead at RSM Classic 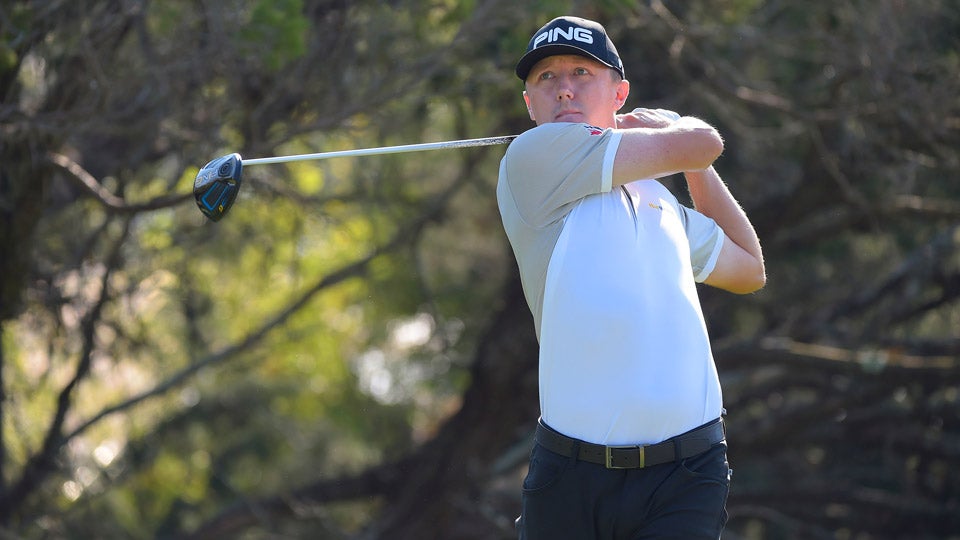 Mackenzie Hughes during the first round of the 2016 RSM Classic.
Getty Images

(AP) — Mackenzie Hughes, the Canadian rookie on the PGA Tour, had thoughts of a sub-60 round on a perfect day for scoring in the first round of the RSM Classic. He wound up with a 61 on the Seaside course.

For Stewart Cink, a great start to the week got even better on Thursday.

Three days after his wife, Lisa, received a good report on her Stage 4 breast cancer, she was in the gallery at Sea Island as he posted a career-low 62 to finish one shot behind in the RSM Classic.

It showed in his easy smile and the peaceful walk on a gorgeous day in the Golden Isles, a happy day in a year filled with unimaginable trials.

Cink, winless since his British Open victory at Turnberry in 2009, stepped away from the PGA Tour in May when his wife was diagnosed with cancer. After nine rounds of chemotherapy, doctors at the MD Anderson Cancer Center in Houston switched her over to what Cink described as a maintenance program. “I am just really encouraged by the way she’s been able to fight and handle it,” Cink said. “She’s had definitely a lot of ups and downs and she feels pretty well, and she got a good report Monday – real good. She’s really like an inspiration for me.”

Cink was a strong presence, especially with his wife in the gallery.

She has only missed one tournament since a sporadic return to golf, usually walking 18 holes. The exception was the St. Jude Classic at Memphis this summer, when she only managed nine holes each round.

“It was about a million degrees,” Cink said. “The wig is hot.”

Cink, with six PGA Tour victories, five Ryder Cup teams and a claret jug from his British Open playoff victory over Tom Watson, was jolted when his wife was diagnosed in the spring. His primary concern was her health, and over time, he worked on his own state of mind.

“I’m just trying to let golf be a piece of my life and not let life be a piece of golf,” Cink said. “It grew out of our situation with Lisa where I felt like I had a chance to do some things to just kind of turn myself around. The last few years haven’t been that great for me productivity-wise on the golf course. So I decided to make some changes and felt like if Lisa can fight, I can fight.”

It started to turn at the end of last season when he tied for 14th in the Wyndham Championship, his best finish in more than a year. He is coming off encouraging performances in Las Vegas and Mexico (he tied for 15th at both tournaments), and then headed to Houston for his wife’s visit with doctors.

“She had very limited side effects, which I can only say that she’s being looked after by someone bigger than us. So she’s responded well,” Cink said. “She’s still got Stage 4 cancer. The cancer, it’s like when the horses get out of their yard. It’s hard to get them back in, can’t get them back in. So she’s going to be on maintenance hopefully for a long time.”

Cink is using his one-time exemption from the top 25 in career money to play this season, though he doesn’t know how often he will play.

He only knows he won’t be at tournaments without his wife.

“If you see me out here playing, then you can assume that means that she’s doing fairly well, at least well enough to travel,” he said. “Because I’m not going anywhere without her.”

She was in for quite a show on Thursday.

Cink poured it on toward the end of his round with four straight birdies, capping it off with a fairway metal to the fringe on the par-5 seventh for a two-putt birdie that put him at 9 under for the round. With the Seaside a par 70, he had a reasonable shot at 59.

“It did cross my mind,” he said. “That’s actually the first time I’ve ever been that low where I had a chance to shoot that.”

The only blemish was a three-putt from 45 feet on the ninth hole for his only bogey. It was still a career-best on the PGA Tour by one shot.

Hughes actually thought about a 58 when he reached 9 under with four holes to play. Byrd had five birdies in a six-hole stretch late in his round. No one shot better than a 7-under 65 on the Plantation Course, which is where Cink plays on Friday.