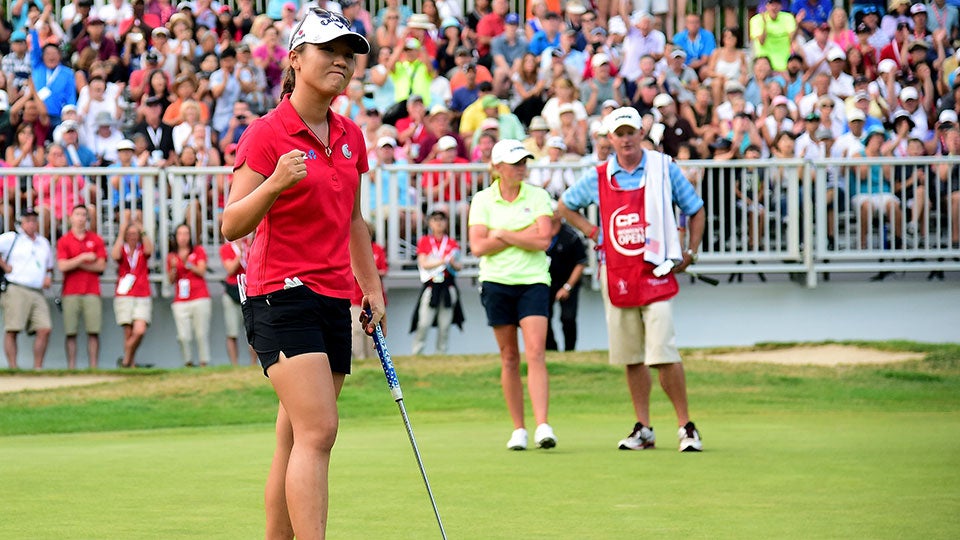 Lydia Ko of New Zealand celebrates her putt to beat Stacy Lewis on the first playoff hole during the final round of the Canadian Pacific Women's Open at the Vancouver Golf Club on August 23, 2015 in Vancouver, Canada.
Getty Images

COQUITLAM, British Columbia (AP) — Lydia Ko won the Canadian Pacific Women’s Open for the third time and first as a professional Sunday, beating Stacy Lewis with a par on the first hole of a playoff.

The 18-year-old Ko finished with an even-par 72 to match Lewis at 12-under 276 at Vancouver Golf Club. Lewis, also a playoff loser this year in the ANA Inspiration, had a 67.

“This feels amazing,” Ko said. “I had an amazing week. … To play good golf in front of great crowds was one of the highlights of this week. I feel somewhat Canadian.”

Ko won in 2012 at Vancouver Golf Club at 15 years, 4 months to become the LPGA Tour’s youngest winner and fifth amateur champion. The New Zealander successfully defended her title in 2013, also as an amateur, in Edmonton, Alberta. She has three victories this year to push her career total to eight.

“It’s great to come back to Vancouver and play well in front of such big crowds,” Ko said. “I didn’t know that in 2012, I might be coming back here in a couple years, and then winning here again. So many great memories here and, hopefully, we’ll be able to come back here.”

Ko won with a 2 1/2-foot putt after Lewis missed her 9-foot par attempt.

Lewis drove into the left rough and missed the green with her approach. Ko hit the fairway and green, though she left a 50-foot putt.

“I said, `Hey, you’ve just got to concentrate on your game, just one shot a time,’ and that’s what I tried to do,” Ko said. “I said, `I don’t want to get too aggressive to that pin, but maybe it was a little bit too safe and maybe wasn’t the best shot going in. I made a really good first putt on my normal 72nd hole, and made a good putt on the first playoff hole.”

Lewis has 19 runner-up finishes, six since winning the NW Arkansas Championship in June 2014 for the last of her 11 LPGA Tour titles. This year, she has finished second four times and third three times.

“If you would have told me at the beginning of the day, I was going to be in a playoff, I would have been pretty happy,” Lewis said. “Just with the way my game has been over the last month or so, I felt I was close to putting together a good round, and that’s what I did today. Still, left a few out there. But would have liked a better lie in the rough in the playoff, but other than that, it was pretty good.”

So Yeon Ryu, the winner last year at London Hunt in Ontario, tied for third with fellow South Korean player Sei Young Kim at 11 under. Ryu had a 64, and Kim shot 68.

Canadian teen Brooke Henderson, coming off her first tour victory last week in the Portland Classic, closed with a 67 to tie for 23rd at 4 under.

“I wanted to show and give the crowd a little bit of excitement,” the 17-year-old Henderson said. “I think today I did that. I knew I was capable of it. The other couple of days I was hitting the ball not too bad, but just wasn’t making any putts. Today they fell.”