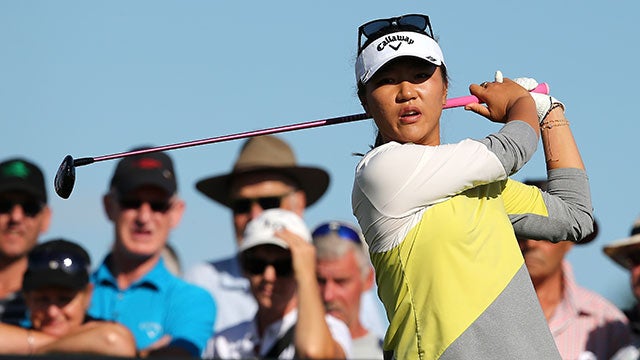 Lydia Ko shot a course-record 61 in Round 2 of the New Zealand's Women Open.
Getty Images

CHRISTCHURCH, New Zealand — Top-ranked Lydia Ko broke the course-record with a career-best 11-under 61 on Saturday to take the second-round lead in the New Zealand Women’s Open.

The 17-year-old New Zealander, coming off a victory Sunday in the Women’s Australian Open, broke the Clearwater record of 63 set last year by Mi Hyang Lee in her victory.

”After the first, I was pretty angry. I got into the rough and it was pretty tough for the pin location. I left it short and that really made me angry as I did that yesterday and was not going to do it again today. The greens were much better today and rolling better and after that eagle I just got myself into the right position.”

England’s Charley Hull was second at 10 under after a 64.

”Coming from Royal Melbourne last week the greens were so fast and really tricky. With these ones you can be a bit firmer and not allow so much break,” Hull said. ”I think I had 26 putts. I hit some good putts out there, so I’m pretty happy with the way I played. You always believe you’ve left a few putts out there, but I holed a fair few as well. Going into the final day I think I’m in a good position.”

The tournament is sanctioned by the European and Australian tours.