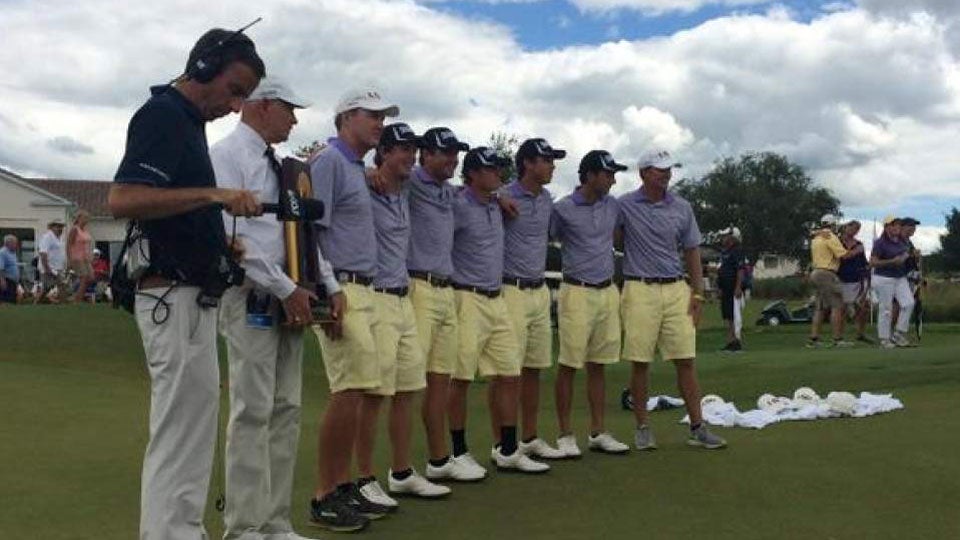 The LSU team after their victory.
LSU Athletics

BRADENTON, Fla. (AP) — Ben Taylor made a tricky 8-foot par putt on the 18th hole Wednesday to give LSU its first NCAA golf championship in 60 years.

The Tigers beat Southern California 4-1 at The Concession Golf Club for their fifth team title and first since 1955.

“To finally get it done is something very special.” LSU coach Chuck Winstead said. “We played and lost to a very good Alabama team last year that won the national championship. It’s more than golf for them, because I’m proud of them as golfers and as men.”

After Taylor holed the putt for a 1-up victory over Bobby Gojuangco, he dropped his putter and embraced teammates who raced up the fairway to the final green.

“The first (putt) was up the slope and very quick, and I didn’t even get it anywhere near the hole on that putt,” Taylor said. “Then I had an 8-foot putt, down grain and hill. Coach always says to hit the last putt, it’s just one more putt. When I hit it, I knew it was going in the hole without a doubt.”

“It was a very special moment to end my college career with a putt to win a national championship,” Taylor said.

Brandon Pierce got LSU on the board, beating Rico Hoey 2 and 1. Zach Wright extended his record to 5-0, topping Sean Crocker 3 and 2. Eric Ricard beat Jonah Texeira 1 and 2.

“I’ll remember this for the rest of my life,” Sugimoto said. “It’s bittersweet college golf ending, and besides not winning it all today, I wouldn’t change a thing.”

Southern California missed a chance for its first team title.

“Second place is way better than third,” Trojans coach Chris Zambri said. “In the end, where we are, that’s how we’re measured, so I’m pretty bummed. You’ve got to play great and survive, so when you get (to the final), you want to get it done. Again, second beats third, fourth, dead last by a mile, yet we still haven’t won a national title and that’s a bummer.”