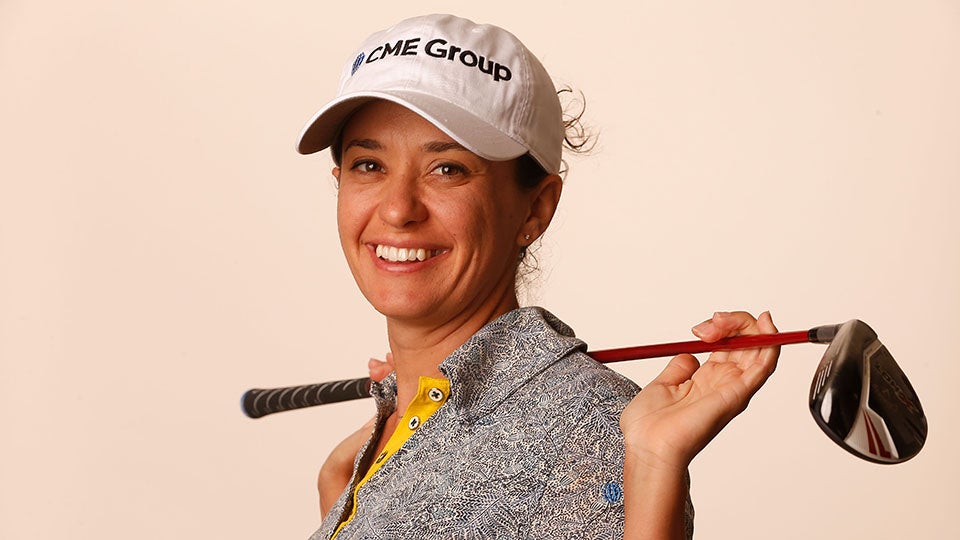 Mo Martin poses for a portrait ahead of the 2015 LPGA Founders Cup.
Christian Petersen

Despite her four short seasons on the LPGA Tour, Mo Martin has the presence of a veteran. The Pasadena, Calif., native was a freshman walk-on at UCLA, where she played all four years and was voted MVP in 2002. She played the Futures Tour for six years and was awarded the Heather Wilbur Spirit Award for “dedication, courage, perseverance, love of the game and spirit toward achieving goals as a professional golfer.” In 2014, she won her first and only LPGA title to date, the RICOH Women’s British Open, in stunning fashion. After leading for three rounds she fell back three strokes but sunk an eagle on the 18th to win by one.

What word would you use to describe your season in 2015?

If I had to sum it up in one word, it would be consistent. It was a great ball striking year. My best putting weeks I was in contention and had some good finishes. But there’s definitely been an adjustment growing up with the long putter to the short putter…I’ve only been putting with it for a couple of years now, so there’s still some adjustment in learning my stroke and learning my tendencies. Starting in 2015, I was wearing a splint — I was coming off of a thumb injury from the previous year — and I didn’t know how many tournaments I could play in a row. I was just extremely happy and grateful at the end of the year to play the full season.

And how’s it doing now?

Thumb is doing great, I’ve got the best hand therapist in the world! Her name is Mo Herman [laughs]. She’s helped me create splints that support my thumb and the joint that’s injured. I’m going to be playing in a splint for the rest of my career, and I’m happy to do that to get away from the pain.

Great news! So what’s something you think the LPGA Tour can do to grow the game of women’s golf?

I think to grow the women’s game, we simply need exposure. I think the quality of golf is very prevalent, week in and week out. Our personalities out here…we have so much to offer. It’s going to be an inspiration to young players now. Instead of winning a major, it can be winning a major and a gold medal. It’s just inspiration in a different way.

I hear, every week, somebody come up and say, ‘We love the women, we love watching the LPGA, we’d much rather watch the LPGA.’ Maybe that same person is going to say the same thing to a PGA Tour player, I don’t know, but I really just think it’s going to be hinged on exposure. So I truly believe that the more the LPGA is exposed, the more we’re on TV — primetime and major channels — I think that’s going to help our exposure and just bring to light the quality we have to offer.

So is it time for a Women’s Masters then?

That’s a good question. That’s a hard one for me to answer. I don’t think we should take the Masters and try to make that something for the women. But having different special events that we do have — we added Evian a couple of years ago as another major — I think what would be great is adding a match play event.

Match play events are some of my favorites to watch.

They’re very exciting, and it would be great preparation for the Solheim Cup. And just like they added match play into the NCAA championship, I think that was received very well. It was very popular. It would be fun for us too. As American players growing up, we don’t play a lot of match play, so it would be good experience for us as well.

[Laughs] I mean, start with a major, why not?? It was fantastic, it was literally a dream come true.

You’re not quite in the cutoff for Olympic contention, but how are you going to prepare for a chance to compete for the United States?

Have you given any thought at all to the threat of the Zika virus in Rio?

We can get scared to death if we think about the different potentials, like terrorism or different viruses that break out in certain countries, malaria for example — that’s hit close to home on the LPGA. But I don’t think that should stop any experience, I don’t think that should stop the excitement of what that country has to offer, because those things can happen everywhere. I don’t think going about it with fear will help anything, but planning, being safe, I’m a hundred percent in favor of.

(RELATED: Zika Be Dammed! The Women Are Ready for Rio)

If you had to choose between a major, a Solheim Cup and a gold medal, what would you choose?

At the end of a career, I don’t think anybody would be disappointed with either a Solheim Cup trophy, a gold medal or a major championship so, they’re all fantastic — cannot choose one.

What’s one thing you could take away from your time on the LPGA thus far?

I’ve been playing as a professional for over 10 years, so this is a very difficult question. But I’ve made some of the best friends out here. I’ve made incredible friendships through pro-am partners, through fans that have changed my life.

Golf in and of itself has changed my life and taught me so many things. Matured me as a person, emotionally, mentally, spiritually. I do know that at the end of my career, I didn’t want to go to all of these countries, all of these amazing places and just know the hotel and the golf course. So I make an effort every week to do something cultural, something local. To eat foods that are local to that place, to talk to different people. And I’ve even made side trips — I’ve gone to Cambodia, to Angkor Wat and the temples there and gone on a meditation retreat. I just try to really take advantage of the places we go to and soak up the culture, because that’s a gift that not a lot of people get and that I am very, very fortunate to have.