LPGA Takeaway: Karrie Webb on Keys to Success After Two Decades on Tour 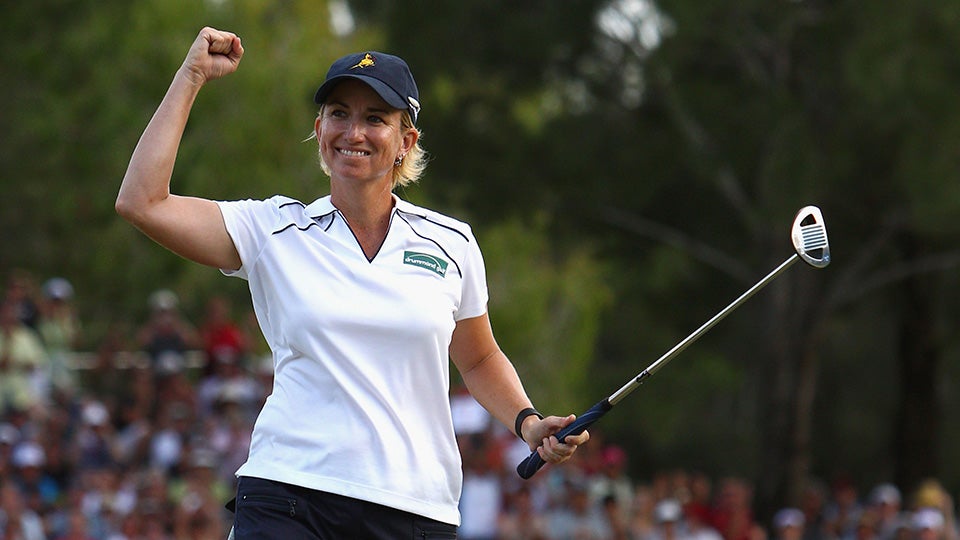 Karrie Webb celebrates after sinking her winning putt on the 18th hole during round four of the 2010 ANZ Ladies Masters.
Ryan Pierse

Karrie Webb is widely considered one of the most successful female golfers in history. She has 57 professional wins over her more than two decades of professional play. She’s completed the former grand slam not once, but twice, having won seven majors at times when LPGA major titles were fluctuating back and forth; the only remaining one in the modern slam being the Evian Championship. The Australian star was a two-time LPGA Tour Player of the Year and was also inducted into the World Golf Hall of Fame in 2005.

This is your 20th season on the LPGA Tour. You are 41 years old and have 41 LPGA wins. That’s something not a lot of golfers can say they’ve done. What are your keys to success?

My key to success of 20, 21 years [on tour] is just to love what I do. There are days where I think it can be a grind, or you go through a patch where you don’t play well or you don’t feel like you love it, but I think the key is that deep down you really do. I think I’ve been very good at taking breaks from the game as well. You look at some of the younger players and it’s just really, really full on; they’re playing 30-tournament-a-year schedules. I think I’ve been good at keeping a good balance and having interests away from golf that makes it good when I come out to play golf and really want to be on the course.

I love to do any activities around the water. I grew up on the coast in Australia, and I went fishing with my dad and I still like fishing. I have a boat in Florida and I like to be on that and really anywhere near the water.

You’re from Australia, where golf seems to be having a moment. What does it mean to represent your country and see Australian golf take off?

We’ve had our ebbs and flows but we’re on the upswing now with both the men and the women. We’ve had some great young Australian women come through like Minjee, and Su Oh is a rookie this year as well. It’s great to see. We hope it continues to grow in Australia and that we keep producing good players.

You already completed the grand slam when the du Maurier Classic existed and have won seven total majors. What would it mean to win the Evian Championship to complete the modern grand slam?

I feel like I’ve completed the Grand Slam, and then I completed the next one—the Super Slam. If you were to ask me this 10 years ago, I would’ve been like, ‘What?!’ [Laughs] I think I’m possibly the only person who has a chance to do that. It would be pretty cool if I could do it and say that I’ve won all 6.

What would you even call that, a Trifecta Slam?

I have no idea. I’ll let the media come up with a name for it. [Laughs]

That’s a tough one. I would say the most emotional, and the memory that comes to the forefront of the majors I’ve won, was in 2006 at the Kraft Nabisco and holing the wedge on the 72nd hole. I think at the time I thought I’d holed out to win even though I was a few groups ahead of the leaders. I’ve probably played better golf in some of the other majors I’ve won, but that final round and how I finished is probably why I hold that up there so special.

What’s something that’s challenging you this year?

I think my biggest challenge this season has been just to let the hard work that I’ve done shine on the golf course. Every week I feel like I’m really, really close to playing well, and I’m just getting in my own way on the golf course. I’m trying to find that balance of being intense enough to play well and relaxed enough to let that happen.

You’ve been on tour a long time. What’s it like to see the LPGA where it is now?

It has grown leaps and bounds—the tour. Talking about me getting in my own way, I definitely can’t afford to do that, being one of the oldest players on tour. You watch the teenagers come through and they don’t have any fear and they don’t get in their own way yet. They haven’t felt a reason to get in their own way. It’s fun to watch them. It reminds me of when I was young too. Coming out here, being fearless and playing golf that way.

In your opinion, what’s the LPGA’s most important major?

I think the cream of the crop before KPMG would’ve been the U.S. Open, as far as what it took to win the Open. It’s on a different course every year, so it doesn’t set up the same game every year. I think it’s the most emotionally demanding—it’s physically demanding, but it demands a lot of your emotions and mental fortitude to win the U.S. Open. As the years go on and we start to play on some of these great courses, I think that [the KPMG Women’s PGA Championship] will be even par against the U.S. Open.

As a veteran player, what can you do to help grow the LPGA?

I think it’s always a catch 22 when we’re compared to where the men are. I think that it’s good to strive to be where the men are with the TV revenue we gain, but I think we have to think about our product in a different way. As a whole, all the girls who are members of the LPGA know that they have to stick together and grow our brand together and it’s not all about just playing good golf. We need to work as a team to make sure our sponsors are happy. If our sponsors are happy and were putting on a good show on TV, the TV ratings become better and the TV contracts become better and we grow as a tour. We’ve done a really good job of that over the years. Our staff and Vicky Goetze, our [player] president, do a good job of reminding us when we’re slacking, or just to remind us to continue to do a good job. That’s the main thing—everyone buys into the fact that it doesn’t come to us as easy it comes to the men, and we have to work harder.

There seems to be a lot of really deep camaraderie on tour.

Oh definitely. I think probably even more so when we weren’t playing for as much money. Everyone had to stick together. When I came on tour, I was 21 and the youngest on tour. Now, girls are 17, 18. They come out with family and an entourage with them. When I first started, you had to have friends because that was your family when you were on the road.

What’s something people don’t know about being a professional golfer?

Walk me through the feelings you had when you were inducted into World Golf Hall of Fame in 2005.

That was really special year for me. That was the end of my 10 years to qualify for the LPGA Hall of Fame, which qualified me for the World Golf Hall of Fame. My World Golf Hall of Fame induction was first, and I know that induction ceremony is televised. I feel like your speech is a hugely important thing. I had a lot of family and friends [watching]. It’s really hard to write a speech to thank everyone who’s helped you along the way to get you to stand there. [Pause] I’m getting emotional thinking about it. It was a very special moment.

If you could take away one thing about being on tour, what would it be?

I think it would just be that I am proud to be a member of such a great organization.