LPGA Takeaway: Gerina Piller on What Everyone Can Learn from the Women’s Game 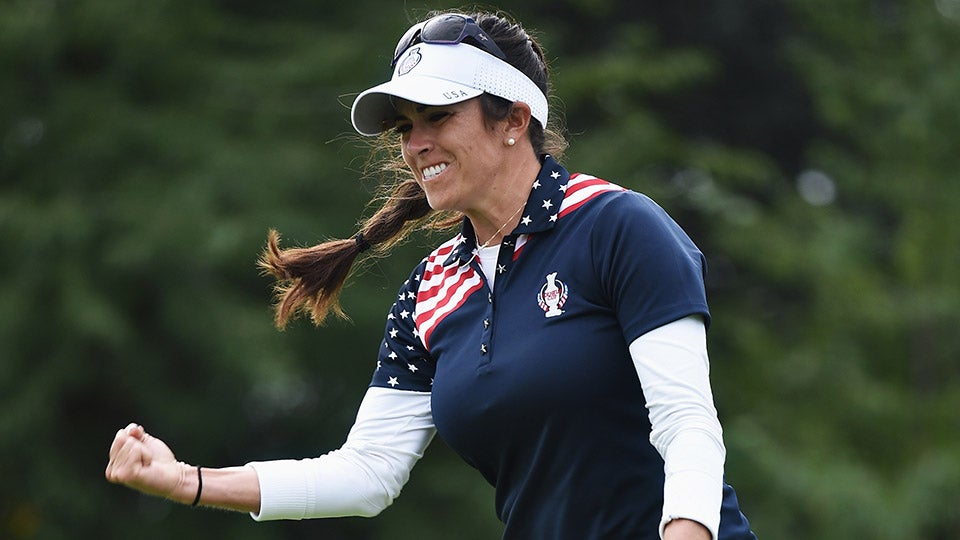 A native of Roswell, N.M., Gerina Piller turned professional in 2007 after a decorated collegiate career at the University of Texas El Paso, where she played all four years. After two unsuccessful bids for LPGA Tour membership in 2007 and 2008 (when she played on the Futures Tour), she gained conditional LPGA status for the 2010 season. Piller has 25 top-10s, including two runner up finishes in 2015 and three top-10s so far this year. She made the 2013 Solheim Cup as a Captain’s Pick, having only played the game for 13 years. At the 2015 edition, Piller made a clutch putt on 18 to win the match against Team Europe’s Caroline Masson, giving Team U.S.A a full point and ultimately pushing them to victory in one of the greatest comebacks in Solheim Cup history.

Tell me a little bit about how you felt about your last season on the LPGA Tour.

I feel like last season was a pretty big success. I obviously didn’t get the win I hoped for, but that doesn’t define my season. I had some great tournaments, finished out strong with the second place, and obviously Solheim being the highlight of the year — having that putt and making it — was pretty special. 2015 is definitely going to go down in the memory books.

No kidding. Your experience at the Solheim Cup was definitely unique! Tell me about that putt.

The Solheim Cup putt…it’s one of those things you don’t get the opportunity that often to have that putt. Golf is a funny game, and having those two teams at that level, having it that close and actually coming back from that deficit was pretty cool. Not only that, but just being in that situation — that’s kind of what you grow up practicing for. You’re on the putting green, on your last putt for the night or your last drive, or whatever it is. I always told myself, ‘This is the last drive, I’ve got to get it into the fairway to win the U.S. Open,’ or ‘I’ve got to make this putt to win the Solheim Cup.’ Actually to have that putt, and to make it, was so special. I still can’t believe that I did it. It’s a memory that I’ll cherish forever. Is there anything that really challenged you last season?

I’d say my biggest challenge for 2015 was getting out of my own way. That was my fifth year on tour, and I belong out here and I’ve had some good finishes, but it’s just kind of fine-tuning what I already have. There’s not many major changes I need to do, just becoming really consistent and hopefully getting that first win under my belt and many more to come.

So what will you do to prepare for one of those coveted spots on the U.S. Olympic team?

Preparing for the Olympics is sort of out of your control. The one thing you can control is one shot at a time. I know how cliche that sounds, but to go out there and be your best at every shot, I think that’s huge in itself. You’ve got to play your game and kind of let the rest fall into place. You can’t control the other girls and what they’re doing. I’m just going to focus on what I can control and that’s hitting great shots, staying in the moment, staying confident and just being the best that I can be.

The average golfer would love to hit it that way but they can’t relate to that. And I’m not saying we don’t hit it or we’re not as strong as the men, but [the way] we hit it is more of a reality.

If you had to choose, would you choose a Solheim Cup, a major or an Olympic gold medal?

If I had to choose between a Solheim Cup, a major and a gold medal, I’d probably have to say a major. Not saying that anything else is not as important, but obviously we got the Solheim Cup win — a second one would be great! [Laughs] But I guess, for me, that’s the hump I need to get over. To be a major champion is a huge honor, so I think that would be really awesome.

What, in your mind, has to happen for the LPGA to continue growing the game?

To help the LPGA grow? I think we’re kind of doing it out here. We’ve got the young faces — they’re young, they’re talented, they’re beautiful…I just think more exposure as far as network television, obviously that always helps. But I’ve never heard someone come to our event and say a bad thing. They’re always like, ‘We always enjoy the experience, we’ll always come back’ or ‘I like watching the girls, we can relate to their swings — the tempo, the distance.’ Because the men, they do hit it abnormally far. The average golfer would love to hit it that way but they can’t relate to that. And I’m not saying we don’t hit it or we’re not as strong as the men, but [the way] we hit it is more of a reality. [Laughs] I’m not sure how to get more spectators out here, but I know that the guys in the pro-ams just love playing in the pro-ams, and it’s just one of those things where exposure is huge. The trajectory of the tour, the way we’re getting more exposure in different countries, like Korea — they are crazy about women’s golf and it’s awesome to see.

What’s one thing people don’t but should know about being a professional golfer on the ladies tour?

We do not fly on private jets, and we have to book our rental cars and our hotels, and we fly, like, American Airlines just like anyone else, no TSA pre-check, the whole nine yards. We pay our entry fees. The thing that people often forget is taxes. Taxes are a NIGHTMARE. Every state or country you win money in, you have to pay their tax. So even though we’re making the money that you see on our money list, however we’re paying a lot more in taxes [laughs].

If you could take away one thing from your five years on tour so far, what would it be?

One thing I could take away from playing on the ladies professional golf tour is the dedication. You come out here, and you’re kind of your own boss. You have to have the motivation to come out here and practice every day and want to get better. There’s a lot that goes with it. You kind of run your whole show: you have your caddie, you have your coach, and you have to find out what works best for you. It’s something that will help me later on in life with being independent, being responsible and kind of running a mini-business.