LPGA Takeaway: Commissioner Mike Whan’s Big Plans for the Future of the LPGA 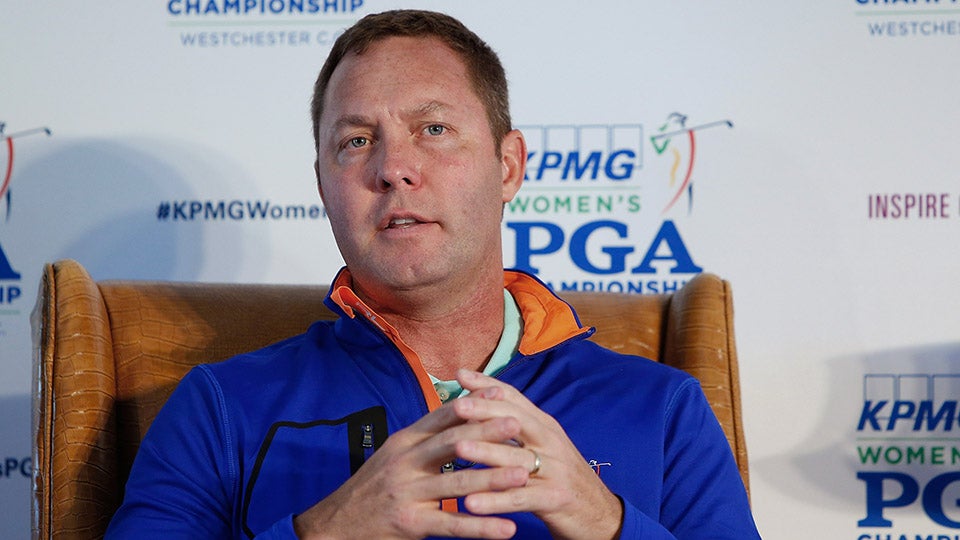 When Mike Whan became the commissioner of the LPGA in 2010, the ladies’ tour was in turmoil. Now, six years later, the LPGA has a record number of events, growing purses, more television representation, and a deep talent pool drawing from more than 25 countries. But Whan, a father of three boys, isn’t done yet — the ‘Commish’ has big plans for the future of the tour, and explains why overseeing it is like raising 300 daughters he never had.

You’re a sports guy with a sports business background, having worked in both hockey and golf. Why did you want to get involved with the LPGA?

It started at an early age. I was a caddie when I was a young kid. If you made it through a summer of caddying, you got to be what was called a bunker boy, which meant you worked in the sand traps for a year. And if you made it through that, you got to cut greens and fairways, so I was cutting grass all the way through high school and college. It was only a matter of time before golf brought me back to the sport. It’s a special sport to me and I’m glad to be part of it.

What are you most proud to have accomplished in your six years as commissioner?

Obviously I’m proud of the tournament growth, I’m proud of the purse growth and the TV, but what I’m most proud of is probably our biggest secret, and that is how much the LPGA has grown girl’s golf over the last four or five years. When we started this event here in Phoenix [the Founders Cup], we had about 5,000 girls a year being introduced to the game. Now, there’s over 50,000 girls a year being introduced — a 900% increase in the program. There’s more than 50% more girls playing the game under the age of 18 today than was playing when we started this event back in 2011. So I’m proud of what we do on TV, I’m proud of what we do inside the yellow ropes, but what we’re doing for the next generation of this game, how we’re leaving golf better for the next generation of girls, is what we should be most proud of.

How do you navigate the gap between getting young girls to play and getting girls to pursue it professionally?

There’s a lot to think about when you think about young girls versus girls trying to qualify for Q-School or make it to the LPGA. At the end of the day, we aren’t trying to create the next Morgan Pressel or Paula Creamer or Lexi Thompson, we’re simply trying to make this game more acceptable, more friendly, more open to young girls. We don’t care if they become great golfers, if they become Saturday hacks like me, or if they just watch the game on TV as fans. We just want to make sure that women consider this game as much their game as their husbands or their sons. Right now, it’s about 80-20 men to women in the sport, and I believe it’s not out of the realm of possibility to think that in 10-15 years, this is a 50-50 sport. If we’re going to grow the game, it’s not going to come through male growth, it’s going to come through female growth. So of all the things we’re doing at the LPGA, nothing is more important than how we’re changing the face of this game for the future.

So what’s your top priority right now in your position?

Currently, the top priority is providing a bigger stage for the best female golfers in the world to play on. What I mean by that is, if you think about the men’s game, they’ve got eight, nine, 10, maybe 20 times a year, the whole world stops and watches and there’s the broadcast coverage, the network coverage, the ESPN SportsCenters of the world…We get that a couple of times a year, so my goal is to really expand that. More network TV, make our bigger events even bigger, and make sure that at least five or six times a year, we are the sports story — not just the women’s golf story, not just the Golf Central story, but the sports story. We’ve had moments like that in the past. My top priority is to make sure those moments are much more consistent year in and year out.

What’s the best part of your job?

The best part of my job is the fact that the job is never the same today as it was yesterday, and I have no idea what to expect next week at the same time. I travel all over the world, we have fans and customers and friends from virtually every part of this world. I get to see young women, who are probably the most overachieving people you’ll ever meet, in the prime of their career, striving to be the best in their career. It always makes me chuckle when a player says to me, ‘Commish, I don’t know what I’m gonna do when I’m done playing golf cause I’m not really qualified to do anything.’ And I say, ‘Let me get this right. You’ve figured out how to be the best of hundreds of players in the world, super self-disciplined, fully committed to learning and reapplying yourself, and you’re not sure if you’re going to be successful after golf?’ They’re all going to succeed in whatever they do next. I’m lucky. I get to see great athletes who are in the prime of their career, and I get to be with other business partners and fans who understand that this game is so much more in life than just a game.

The worst part of my job is the amount of time I’m away from home. I’ve always said my biggest fear in life is that on my tombstone it’s going to say, ‘Here lies a great commissioner but a pretty average father.’ And I’m OK if it says the opposite, but good commissioner and bad father would be pretty tough to swallow. I do a lot of weird traveling. I’m the only guy that would fly back from Asia, watch a high school football game and then fly back to Asia again the next day, but I want to make sure that I’m there as much for my kids as they were there for me. So it’s hard, cause I’ve got 300 young players out here that I feel are important to me and I know I’m important to their life, but I gotta make sure the three kids that are home understand they’re the top priority in my life. That’s the balance I work on everyday. All three of my boys at home play golf. None of them are ever going to get a check for playing golf, kind of like their father, but there’s nothing more enjoyable — especially when on vacation — than when the foursome is me and my boys. My wife always laughs because when she was pregnant with our third, I literally prayed for a girl, just cause we wanted to have a girl in the family. As she says, God listens to every prayer and answers it in his own time. I woke up 15 years later with 300 young daughters that I’m watching grow up as well. In a strange way, my whole family golfs, both at home and out here on tour.

What’s one thing you would take away from your time working at the LPGA?

I think the greatest competitive advantage of the LPGA is our culture. People that work at the LPGA treat it like it’s their own business. Whether they’re a commissioner or a receptionist, a teacher or a tour player, there’s a belief by all of those people that this is their tour, this is their company. Everybody’s involved in the decisions we make. On my board are six active players and one retired player president, so even when I go to my board, my bosses, and talk about what kind of job I’m doing and my ideas, I’m sitting across the table from people that have a glove hanging out of their back pocket. We don’t have a player’s union and we’re not negotiating a contract agreement. We run the business together. When I leave this job, I’ll think about the fact that we were in this together, and I’ll think about the fact that while I was here I acted like a founder, and when I leave I hope I’ll still act like a founder regardless of what’s on my business card.

Given the success you’ve had, where do you go from here?

My first four or five years on the job was all about creating stuff we didn’t have, which was more events, bigger purses, new TV around the world. We’re up 50% in tournaments, we’re up 60% in purses, we’re up 100% in TV media and 100% more in TV coverage — we’re now covered in 170 countries. In terms of building the platform, I feel like that part we’re pretty much complete. Now the next challenge over the next five years is spending time, effort and money on what we do have: the tournaments, the partners, the platforms, and making those bigger, making sure that when we play there’s more attention, more countries, bigger platforms, more network TV. That’ll be exciting because it was fun to work on what’s new but it’s even more exciting to work on the folks that have been with you for the last five or six years. For the first time, we’ve really shifted our efforts and said, ‘Let’s take what we have and make it spectacular.’ But the last five or six years, we’ve had to create spectacular. Now that we’re there, it’s time to think about how high we can go.