With the first tournament of the LPGA’s 2019 season underway at the Diamond Resorts Tournament of Champions, players are beginning to adjust to the new rules. Lexi Thompson, Lydia Ko, Ariya Jutanugarn, Stacy Lewis and Cristie Kerr were among those who discussed the changes in strategy and preparation.

Thompson, who just announced that her brother will be on the bag this season, doesn’t think she’ll use the flagstick often under the new rules. “I don’t really know what that can help,” Thompson said. “I’ll never do it unless the putt’s really fast and I need the putt to stop.”

Lewis likes the idea for recreational golf, but said it “seems strange” in competition.

Jutanugarn is a fan. “I don’t have to wait for my caddie to take the pin out; I can just putt it,” she said.

Kerr was unconvinced. “Unless it’s from 70 feet, you’ll never see me putt with the flagstick in,” she said before the round. “I like what I do on the greens. I’m just going to keep it that way.”

But she did face a putt from nearly 70 feet, left the pin in and, naturally, canned it.

In recent years many LPGA players have become comfortable with their caddies aligning them before shots. Under the new rules, that’s forbidden. Lydia Ko has leaned on her caddie for much of her career and said lining up on her own has been an adjustment.

“So this off-season, I’ve been practicing trying to line myself up,” she said. “It’s something that you’ve just got to get used to. As with anything, it just takes time. Now I feel fine lining myself up when I’m on the range.”

Thompson and Kerr agreed with the change and think the professional game should require players to line themselves up. “I’ve done it both ways,” Kerr said. “For 10 years, I got lined up, and then I got to No. 1 player in the world by not getting lined up.”

Lewis called it the “greatest change.”

The rule that has received the most backlash in early weeks stems from the awkward visuals from the newly-mandated knee-high drops.

“I actually practiced it, believe it or not,” Kerr said. “How to do it, how the ball’s going to bounce. Do you crouch and do it? How are you exactly supposed to do it? So we’re having a little rules meeting that a lot of us will go to to just brush up on it.” 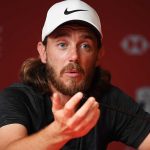 You may also like ‘It’s a little bit odd, isn’t it?’: European pros chime in on rules changes

“Dropping from the knee looks funny, especially on those tall guys,” Lewis said. “Watching those tall guys on TV have to squat down looks kind of funny, but I think everybody’s going to get used to it in time.”

Thompson has practiced dropping from the knee but acknowledged that when it comes to the rules, she’ll check twice to make sure.

“There are so many rules changes I’ve got to read them all,” Thompson said. “I’ve got to just ask before I do anything.”