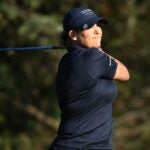 Cristie Kerr pictured during the second round of the 2020 KPMG Women's PGA Championship in October.

Veteran LPGA pro Cristie Kerr and her caddie were injured in a golf cart accident in the early morning hours before the second round of the Volunteers of America Classic, according to a report from Golfweek.

Kerr, who shot a one-over 72 in Thursday’s opening round, was forced to withdraw from the LPGA event after sustaining “serious” injuries.

The incident occurred Friday morning at Old American Golf Club, the host course for the Volunteers of America Classic, in The Colony, Texas.

Golfweek spoke to Kerr’s husband, Erik Stevens, who confirmed that “both Kerr and her caddie, Matt Gelczis, spent several hours in the emergency room with multiple serious injuries before being discharged late in the afternoon.”

Kerr has accumulated 20 victories in her storied LPGA career, including two major championships: the 2007 U.S. Women’s Open and the 2010 Women’s PGA Championship. The 43-year-old American has competed in nine Solheim Cups and is currently ranked 109th in the Rolex Women’s World Golf Rankings.