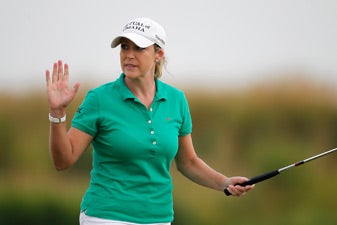 The 39-year-old American closed with a 1-under 69 at Golf de Chantaco for a four-stroke victory over China’s Xi Yu Lin. Kerr opened with rounds of 62, 64 and 69 to take a nine-stroke lead into the final round. She finished at 17-under 263.

Kerr donated $5,000 to a charity called ARTIC in memory of Cassandra Kirkland, the LET player who died from cancer in April. She also remembered a friend in the U.S. who died of cancer Tuesday.

“I’m sorry, but f— cancer,” Kerr said. “I played for them, and I played for myself. I’m so sorry to say the F word, but I’m so sick of people losing people to cancer.

“I’ve been having an angel on my shoulder all week,” Kerr said. “I was on a mission and I got it done for them.”

Kerr has 19 victories on the LPGA Tour.