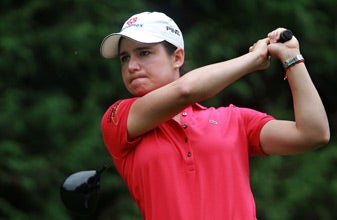 Lorena Ochoa at the Lacoste Open in France in October.
Bob Edme/AP

MEXICO CITY (AP) — Lorena Ochoa is returning to LPGA Tour competition for the first time in five years, but only for her tournament.

Mexico’s greatest golfer said Sunday she will play in the Lorena Ochoa Match Play on May 4-7 in Mexico City. It will be her first time competing since the Lorena Ochoa Invitational in 2012.

“I know I’m going to play, so I’ve been practicing a couple of days a week,” Ochoa said during a visit to the Mexico Championship at Chapultepec Golf Club. “But I promise after tomorrow, I’m going to practice every day. I play OK. I enjoy it.”

Even so, it has been so long that she laughed and said, “I couldn’t find my golf shoes this morning.”

Ochoa was 28 and at the top of her game when she shocked the golf world by announcing her retirement in April 2010 when she still was No. 1 in the world. She was recently married and said she wanted to work on her foundation and start a family.

The decision cost her a spot in the LPGA Hall of Fame because she did not have a minimum of 10 years on tour. Through a revamped process, she was selected for the World Golf Hall of Fame this year and will be inducted in September.

She last played the LPGA Tour when she tied for 18th in the Lorena Ochoa Invitational in 2012. Her tournament was moved this year from November to May and switched from stroke play to match play. She had a hard time attracting a strong field because of the LPGA Tour’s six-week swing through Asia that preceded it, followed by the season-ending event in Florida.

Asked if she was still good, Ochoa smiled and said, “No.”

“I cannot hit after my 6-iron. The 5-iron and 4-iron, it’s impossible,” she said with her infectious laugh. “The driver is OK. For sure, I don’t have the strength, so it is difficult to play the long irons. If I get in the rough, I don’t know what I’ll do. … It’s been a long time. We’ll see what happens.”