Long drive leaderboard has new No. 1, and he jabs Bryson DeChambeau 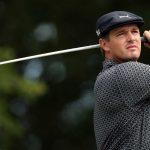 Bryson DeChambeau hits his tee shot on Thursday on the 2nd hole at TPC Craig Ranch.

Lee Westwood, during the final round of the Arnold Palmer Invitational in March, hit a 306-yard drive down the right side of the 6th fairway, watched it drop, then raised his arms in zest. And jest. The day before, his playing partner, Bryson DeChambeau, hit a 370-yard poke to clear the lake that guards the entire left side of the dogleg-left par-5, and multiple times, he pumped his arms in the air on the tee box. Westwood was doing his best imitation.

“I don’t know if you saw me — I hit mine and then I gave it the [makes the gesture] like that,” Westwood said after the round. “Just having a bit of fun with it, you know?”

On Saturday at the AT&T Bryson Nelson, Westwood had a little more. He mimicked his new friend even better.

DeChambeau, the PGA Tour’s longest driver on average, blasted his tee shot 385 yards down the left side of the fairway on the par-4 10th at TPC Craig Ranch. The Tour saluted it. “368-yard carry,” their Twitter account tweeted above a video of the drive.

“Yes but how far did @b_dechambeau hit it up the 8th?” he wrote.

A quick check showed DeChambeau hit it 357 yards on the 482-yard par-4. Westwood?

It’s the longest drive of the season by a yard, topping Cameron Champ’s 424-yarder at the Sentry Tournament of Champions. Entering the final round, it was also the longest drive of the tournament by 40 yards, beating DeChambeau’s 385-yarder on the 10th. (To be fair, there was no video of Westwood’s tee shot available, and the Tour’s TourCast appeared to show that the drive may have gotten some help from a nearby cart path. Westwood is averaging 295 yards off the tee this season, meaning he bested his average by a short iron.)

About five hours after his round, Westwood then tweeted from an iPhone.

“I mean, I’m not short myself,” Westwood said on the final day of the Arnold Palmer when asked about playing with DeChambeau.