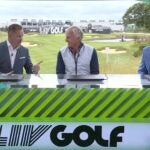 Before LIV Golf had players, before it had tournaments, before it even had a name, it had a promise.

“We’ve talked about golf over the years, obviously, and the way it’s covered,” David Hill told me in January. “What Greg [Norman] wants to do is to create what we see as the most exciting golf television ever.”

The legendary Fox Sports executive sat before me virtually in his beautiful Los Angeles home. He wore a white linen shirt and a wry smile, his voice carrying the frenetic energy of a man who spent the majority of his life turning ordinary events into extraordinary entertainment products. Now, he told me, he was about to embark upon his greatest challenge yet. He had just accepted a new role as a broadcast consultant for his good friend Greg Norman at LIV Golf, and it was his job to bring golf broadcasting into the 21st century.

“The trick with television production is to work out what’s not there and add it,” he said. “I like all my productions to have the audience leaning forward. And I feel that when people are watching golf, they’re leaning back.”

In the lead up to LIV Golf’s first-ever shotgun start Thursday at Centurion Club, just outside London, its power brokers echoed much the same messaging. LIV would be different, it would be exciting and it would be, above all else, innovative.

“The LIV Golf broadcast will be unlike anything fans have seen before,” Will Staeger, LIV’s chief media officer, said in a release announcing the new product. “The innovations we are introducing to the sport will be distributed to existing and new audiences all over the world as we deliver golf coverage dedicated to entertainment and access.”

On Thursday, LIV went live for the first time, presenting its vision for golf’s future in a neon-tinted shade of lime green. Fittingly, that vision was presented to viewers by non-traditional means. LIV Golf does not yet have a TV deal, and it is not tied to a subscription streaming service. Instead, the first LIV Golf Invitational series round was blasted out to the world on YouTube, Facebook and the LIV Golf website … for free.

In many ways, Thursday served as a tryout for LIV Golf’s broadcast team, which is headed by Steve Beim, former U.S. Open and “The Match” producer. And after one day of coverage, one thing is clear: there were elements to like, but the golf-broadcast wheel has not been reinvented.

First, the good: LIV Golf’s broadcast is fast. Really fast. Beim operates his show like his hair’s on fire, showing shots with a frequency rarely seen on the networks. Perhaps not surprisingly, Beim’s broadcast appears to have taken some of its queues from Fox Sports’ coverage of USGA events, telecasts on which Beim worked for a number of years. Over the first 30 minutes of coverage on Thursday, Beim’s broadcast vastly outpaced ESPN+’s PGA Tour coverage, showing nearly twice the number of shots. LIV has an advantage because of its shotgun-start format, but even when compared to the PGA Tour’s coverage when every hole had players, LIV’s broadcast still showed more golf.

Golf fans offput by the PGA Tour’s commercial load and affinity for filler segments were also likely enthused by LIV’s coverage, which had little of the latter and none of the former (no sponsors means no ads). Before the broadcast went live on Thursday morning, LIV analyst Jerry Foltz — who formerly covered the LPGA for Golf Channel — could be heard on a hot mic strategizing the on-air plan to cover five consecutive hours of live television without a bathroom break. This was a welcome change for many regular golf viewers, even if business realities had precipitated it.

Despite their tacky name, the “Don’t Blink” highlight segments were another winner, dropping a dopamine rush full of holed putts and chip-ins in only a few seconds. As was the quad-box used at the shotgun start, which showed four tee shots at once and appeared to be inspired by “NFL Redzone.”

In the not-so-great camp was the virtual leaderboard, which achieved the remarkable feat of taking up 20 percent of the screen while providing little meaningful information. The leaderboard itself has impressive potential — the “holes remaining” stat is a cool addition — but its naming conventions are confounding. In a field already struggling for name recognition, disguising, say, Dustin Johnson’s name as “D. JSN” was a head-scratcher.

And speaking of name recognition, does anyone understand how the team format works? Because after watching several hours of LIV’s coverage this morning, I sure don’t; I didn’t see a single scoring update for what was supposed to be a key differentiator for the LIV series. (I do, however, know that video game sound effects were not what I needed to tune into a sports telecast.)

These are minor quibbles, and it’s entirely possible — if not likely — that Beim and his team of producers are armed with a laundry list of fixes and additions before the second event in Portland next month.

But the bigger problem, the one that will be hardest to fix, is also the simplest: After six months of promising innovation, LIV Golf’s first broadcast was decidedly normal. If not for the wacky color scheme, the casual fan tuning into Thursday’s action might not have noticed a difference between LIV’s product and the one on NBC or CBS every weekend.

Perhaps if it hadn’t come after the last six months of hype, Thursday wouldn’t have felt so underwhelming. The broadcast was well produced, it was watched by a significant audience (at points, more than 100,000 viewers were simultaneously streaming the event on YouTube), and if Twitter commentary is any indication, many of those viewers seemed to enjoy what they saw and heard. That should have been a success for a league that, up until very recently, was uncertain to exist at all.

But that’s the problem with big promises. They’re easy to make, and hard to forget.