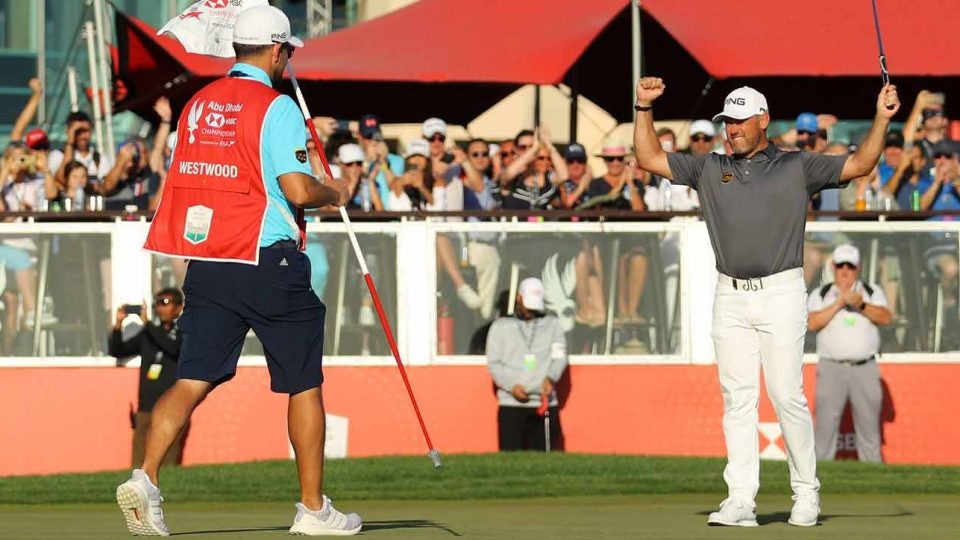 Lee Westwood claimed the 25th European Tour title of his impressive career with style, fending off Sunday charges from Tommy Fleetwood and Victor Perez to win the Abu Dhabi HSBC Championship by two shots, at 19 under par overall. Westwood drained a short birdie putt on the 18th hole to punctuate a final round of five-under-par 67 at Abu Dhabi GC, and lifted his arms in celebration.

This week marked the first win for the 46-year-old Englishman since the 2018 Nedbank Golf Challenge, which in turn was his first European Tour win in over four years.

Westwood’s first professional win was in 1996 at the Volvo Scandinavian Masters. His victory in Abu Dhabi on Sunday means he’s now won in four different decades on the European Tour.

“I can’t believe I’m that old,” he said in his post-round interview, his voice thick with emotion. “It’s getting harder. It’s just nice to come out and keep proving that you’ve still got it.”

News
The Open 2019: The key to Lee Westwood’s swing is something you didn’t even notice

Westwood’s 25 European Tour victories ranks him eighth all-time. Seve Ballesteros has the most, with 50. But of active players, Westwood trails only Tiger Woods (3rd) who has 41.

Though he has never won a major, Westwood has finished in the top 3 in each of the four over the course of his career. He’s also played on 10 Ryder Cup teams for Europe, and has an overall record of 20-13-6. Currently ranked 63rd in the world, Westwood is keen to get into the top 50 so he’ll be eligible for WGCs and the majors, but how about another Ryder Cup berth as well?

“I’m not sure I can take any more Ryder Cups,” Westwood said with a smile. “I’ve played ten and it was good watching the lads last time. But if there’s a chance of that I might as well go for it.”