The PGA Tour Champions is in Missouri this week for the Bass Pro Shops Legends of Golf at Big Cedar Lodge, and there’s one person everyone is missing: Arnold Palmer.

On Thursday, Lee Trevino gave a pre-tournament interview and related the fascinating — and previously unheard — story of Arnie’s final competitive round. It was one bad shot in particular during the senior tour’s Administaff Small Business Classic at Augusta Pines Golf Club that inspired Palmer to hang up his spikes for good. According to ksdk.com, Trevino was being interviewed alongside Gary Player and Jack Nicklaus when he revealed the story:

“I played the last competitive round with Arnold Palmer, at Augusta Pines in Houston. We went to the fourth hole, a par-three. Arnie hits one and he looks back at me and he says ‘How close is that?’

I said, ‘How close is what?’ And he was playing in the tournament – this is a senior tournament.

I said, ‘What are you talking about ‘how close is it?’ The ball hit up on the bank and it rolled back in the water.’

I said, ‘It rolled back in the water.’ I said, ‘Arnie, the pin is on the right side. That’s a tree you were shooting at over there.’ 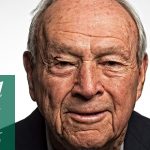 You may also like Arnold Palmer, beloved golf legend and international icon, dead at 87
​

He said, ‘No. I’m going to finish the round. I’ve never walked off a golf course and I’m not about to start today.’

Ksdk.com notes that Palmer went on to finish the round, though without officially counting his strokes.