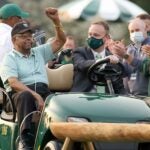 It’s just shy of 8 in the morning on Masters Thursday, and for the first time all week, Augusta National is alive.

The sun is beginning to stretch over the stately clubhouse, poking holes through an enormous oak tree resting just outside its doors. Patrons linger quietly as the sky turns a pale shade of blue, sharing wide-eyed glances in every which way. There’s a buzz in the air — a palpable sense of anticipation. A feeling that’s evident every time a murmur comes from the direction of the clubhouse, sending a hush over the crowd and several-hundred necks craning in its direction.

To the untrained eye, these are the emotions that immediately precede the most-beloved major of the calendar year. But later on, a different reality will become clear. This feeling — the one spurring butterflies and anxious gazes — is what happens in the seconds before one bears witness to history.

Ten paces beyond the first tee stands a man in a green hat and a crisp polo shirt. His name is James E. Williams Jr., and he is positively glowing. His smile radiates from a distance, and though he is surrounded by a small group of friends, he is silent.

Suddenly, the clubhouse doors spring open and the crowd snaps to attention. First comes Gary Player with a small army of family at his side. Then Jack Nicklaus, flanked, as ever, by his wife Barbara. Then, at long last, a cart appears. A short, smiling old man sits in the passenger seat. He is Thursday morning’s guest of honor. The man wears a streak of all-black interrupted only by his shirt, which is a zap of sea-foam green. He is beaming — waving toward the crowd, which has erupted into applause.

He is Lee Elder, and this Masters Thursday morning, he is on the precipice of one final piece of history. Almost a half-century ago, Lee broke the Masters’ color barrier, becoming the first Black competitor at Augusta National. Now, he is seconds away from becoming the first Black honorary starter in tournament history. Elder will not hit a tee shot today despite Nicklaus’ best efforts — his health is declining, rendering him attached to an oxygen tank — but he will take part in the ceremony.

“My heart is very soft this morning, not heavy — soft,” Elder would say later. “Soft because of the wonderful things that I have encountered since arriving here on Monday and being able to see some of the great friends that I have made over the past years.”

His arrival comes much to the delight of a small army of men and women assembled along the tournament ropes sporting dark green hats. This group — comprised primarily of people of color — has come to the first tee at Augusta National at this hour with the stated goal of supporting Mr. Elder. Their hats, which are inscribed with “1975” (the year Elder played in his first Masters), were designed and paid for by basketball star Steph Curry and distributed at the entrance to the gate.

One of those in attendance is Williams, a McDonald’s franchisee and son of the former mayor of St. Louis. He is tucked away against the ropes, straining to get a closer look at the ceremony. He’s remained in his position diligently for the better part of an hour. Williams has no desire to move, which is good, because he can’t. At a small gathering last night, Williams told Elder that he would be along the ropes to witness the 86-year-old’s moment of history, and Lee responded in kind by plucking an old Sports Illustrated cover from his back pocket and signing it for Williams.

I spotted Williams in the moments immediately following the ceremony, his face stuck in an awestruck gaze — a look I identified as pride.

“What this individual did, what Lee did in 1975 was extremely significant, he opened so many doors for the professionals here today,” Williams told me that morning. “But also for the interest in golf among all people in America. He was the first one, so it’s important to celebrate this moment.”

Elder was the subject of our conversation that day, as he was on Monday afternoon shortly after the news of his death spread through the golf community.

I dialed Williams to find him moved by Elder’s passing, reflecting upon the unforgettable few days the two spent together before the Masters began in April. Williams went to Augusta as a guest of a friend, Richard Banks, a longtime Elder fan and frequent benefactor of his events and charitable pursuits. One night, the pair earned an audience with Elder among a small group of friends, listening as Lee shared war stories and memories from his life.

“He told me about how he competed in the Masters in 1975,” Williams said. “How he was an orphan who dropped out of school in the 10th grade to become a caddie. The United Golfers Association (the all-Black tour Elder competed on in the 60s and 70s) — we had so much fun talking about that — because it was the equivalent to the Negro Leagues. He called it ‘the Peanut Tour’ because you couldn’t make a lot of money playing on it, but he saved all the money that he could. And that’s when we talked about Jackie Robinson a bit. The things they spoke about. I can’t imagine that conversation.”

What Williams can imagine, however, is how Elder’s existence shaped life for a generation of Black Americans. When we first met in April, Williams was excited to share Lee’s story with his family, explaining that he planned to give his signed “1975” hat to his young son as a keepsake from the day. On Monday, he prepared for a different kind of conversation.

“Around the dinner table tonight I’ll do the same thing my father did with me,” Williams said. “Our dinner will be about Lee and what he meant to golf. What he meant to America.”

How does one measure progress? Toppled barriers and shattered ceilings are easy flashpoints, but change is harder to capture. That will be the work of Williams’ children and of ours, and it will be due to the courage of Lee Elder.

“I said to him, you know, that I stand on his shoulders and so do many others. Not just African Americans, but everybody,” Williams said. “He made sport better. He made America better.”

This is the legacy Lee Elder leaves behind — a legacy created by insistence, forged through determination, and spread at dinner tables across America. A legacy Elder never sought, but never feared.

“The one thing on my mind this past year is the fact of me being at Augusta, something I’ve wanted for quite some time,” Elder wrote in the New York Times prior to his Masters debut in 1975. “I think I made it clear, when I first came on the tour, that I would be happy to qualify for the Masters. But I wanted to qualify on my own merit, I didn’t want anyone giving me a special invitation.”