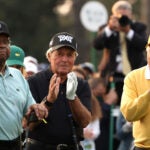 Lee Elder, alongside Gary Player and Jack Nicklaus, at the Masters earlier this year.

Death, for the old and the infirm, announces its arrival with a broadcaster’s greenside whisper. The final breath, the final heartbeat. Sometimes, not often, famous last words.

Crosby, on a golf course in Spain: “That was a great game of golf, fellas.” Bing out.

The final frames, the denouement, in the documentary of geriatric death.

Before it, more often than not, come largely uneventful years. This is nobody’s idea of a highlight reel: The office visit to a specialist; the video conference with a trust lawyer; the meeting with a clergyman making an unprecedented house call. Interruptions in the waiting game that nobody wants to play.

And then there are the exceptions. Morrie Schwartz, from the Mitch Albom book about his Tuesday visits with his old professor. Jakucho Setouchi, feminist Buddhist priest, devotee of the pleasure principle, who died in early November and at a late age. (Ninety-nine.)

Our own Lee Elder, the pioneering golfer who died on Sunday at age 87.

Fred Ridley, Augusta National’s radical chairman, brought Mr. Elder in from the cold. At the one-off November Masters in 2020, and again at the 2021 Masters, Ridley brought Mr. Elder back into public life. Into our lives.

Ridley’s goal, first and foremost, was to honor the first Black golfer to play in the Masters, which Mr. Elder became in 1975. That is, appallingly late. It’s an invitational. There were years, in the 1950s and ‘60s and early 1970s, when Charlie Sifford and Pete Brown could have and should have been invited.

In April, Mr. Elder, blind in one eye, struggling in every physical way, stood on Augusta National’s celebrated first tee, before the first round got underway, alongside Gary Player and Jack Nicklaus. Lee was an honorary starter and it didn’t matter that he couldn’t make a swing.

For years, Nicklaus and Player and Arnold Palmer owned that little Thursday morning ritual. Now there was a new Big Three.

Elder won four times on Tour and eight times on the senior circuit. His career is linked with Player’s and Nicklaus’ in the most meaningful ways. He stood on that tee, the applause in his ears, as a proud man.

But the ultimate gift, stemming from Ridley’s invitation and Mr. Elder’s acceptance of it, was to us, to millions of us across the world, to get acquainted or reacquainted with Elder’s remarkable life and example.

If professional golf has a Jackie Robinson, it is Charlie Sifford, for whom Elin and Tiger named their son. If the game has a Henry Aaron, it is Lee Elder.

No, Mr. Elder did not dominate professional golf as Henry Aaron did professional baseball. Not even close. But Henry and Lee, sons of the Jim Crow South in the years before and during World War II, both pursued their sports with quiet professionalism and little flash.

They didn’t talk about the death threats that came their way. Aaron and Elder had their eyes on the prize. Money in the bank; the respect of their peers; the contentment that comes from doing a difficult thing well. A house they could call their own.

The distance between the 18th tee with a tournament on the line and the batter’s box in the ninth with a game on the line is a hop and a skip and not even a jump.

Earl Woods, a college catcher and a good golfer, knew that well. Tiger’s father and Mr. Elder were buddies. Earl would come around the public D.C. courses where Lee hung out and played. Mr. Elder and his first wife, Rose, managed Langston Golf Course for years. Langston was the epicenter of Black golf in Washington, and you could roll up there any day of the week and see Lee Elder in the pro shop or on the putting green.

But when he wanted a money game, Lee would go to another public course, Rock Creek, near his stately home in the northwest part of the city. All the public courses that Earl Woods knew in the 1970s — in New York and Baltimore and D.C. — Elder knew better.

Earl made sure that Lee was greenside when Tiger won his first Masters in 1997. Maybe you were worried, in the moment, amid the pandemonium, that Tiger would skip on by him. Tiger sees far more than he lets on. He stopped. They hugged.

That day belonged to Tiger — age 21, winner by 12 — and to history. It is entirely possible, even if you follow the game closely, from that April day in 1997, to the November day in 2020 when Ridley announced Mr. Elder as an honorary starter, that you didn’t see Lee once. And, of course, there are the many golf fans in the game today who weren’t born or paying attention in 1997.

When Elder was 21, and all through his 20s and into his early 30s, he played most of his golf on professional tours organized by Black businessmen for Black golfers. This was in the 1950s and 1960s. When Elder finally got on the PGA Tour in 1968, he was 33 turning 34. As a 34-year-old rookie, playing at Firestone, he was in a sudden-death playoff with Jack Nicklaus. You could say that Nicklaus won with a birdie on the playoff’s fifth hole. You could say that Elder won just by getting there.

“Lee wasn’t long but man he hit it on the face,” a friend and a former Tour caddie, Richard “Jelly” Hansberry, said Sunday night in a phone interview. “His thing was putting. He could putt the bumpy greens he played all those Black tournaments on. It was the smooth Tour greens that gave him trouble.”

Lee could putt the bumpy greens he played all those Black tournaments on. It was the smooth Tour greens that gave him trouble.

Nicklaus’ greatness speaks for itself. You could say the same of Tom Watson’s and Bobby Jones’ and countless others who came up in the affluence of the American country club. The best of everything. Nothing wrong with that, but it’s some head start.

Now consider the path Elder took to shooting 280 for 72 holes in the 1968 American Golf Classic at Firestone, the same score Nicklaus shot. But Mr. Elder did it as a Black man who had no come-on-in access to private courses, to plush driving ranges, to junior tournaments, to superior instruction and bespoke equipment. The PGA of America didn’t end its clause that kept Black pros from becoming members until 1961.

Jim Thorpe was a young Black golfer who watched that 1968 Firestone tournament on his uncle’s TV in Baltimore. As Charlie Sifford paved a path for Elder, Elder paved a path for Thorpe. These golfers did not grow up with separate but equal. The equalizer was the scores they could shoot.

Gary Player grew up in a racist country (South Africa) in a racist time, in the years before, during and after World War II. In time, he got his arms around the magnitude of the problem, and he was in position to do something about it. In 1971, he arranged for Elder to become the first Black golfer to play in the South African PGA Championship.

And there they were, on Augusta’s first tee in April, after all those years: Mr. Elder, Mr. Nicklaus, Mr. Player. Cameron Champ came down to the first tee, to check it out. Someday, you imagine, he’ll tell his children, and on it will go from there.

In his public life, that’s how Mr. Elder went out.

Jelly Hansberry was asked Sunday night if Mr. Elder was bitter, in those years, in the 1960s, when he was playing rough courses for modest purses at Black tournaments, while his white contemporaries were playing for big bucks on manicured courses in front of big crowds.

“Nah,” Jelly said. “Not a bit. For one thing, he was having a good time. But also, he knew. He knew he’d have to get better.” Professional golf’s age-old thing. Shoot lower scores on harder courses in tournaments with deeper fields.

And that’s exactly what Mr. Elder did.