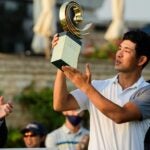 Keita Nakajima earned starts in the Masters and Open Championship in 2022 with his win at this week's Asia-Pacific Amateur.

Keita Nakajima already had an exciting year ahead for 2022 with a start in the U.S. Open on the books, and after Saturday, he added another marquee tournament to his plate — the Masters.

Nakajima, the No. 1-ranked amateur in the world, won the Asia-Pacific Amateur title on Saturday to secure one of the most coveted invitations in all of golf. He also secured a spot in the Open Championship with his victory.

The 21-year-old is the third player from Japan to win the Asia-Pacific Amateur, joining 2021 Masters champion Hideki Matsuyama and Takumi Kanaya.

“I am very proud of what I have achieved,” Nakajima said. “To follow in the footsteps of Hideki-san and Takumi feels great. I am so excited that I will be playing three majors in 2022.”

Nakajima held a one-stroke lead heading into the final round at Dubai Creek and Yacht Golf Club and birdied three of his first five holes. But despite the hot start, Notre Dame senior Taichi Kho was able to keep pace, eventually signing for a final-round 64.

The top-ranked amateur fired a 67 of his own over the final 18, but with Kho going three strokes lower, the duo headed to the 18th tee for a sudden-death playoff.

The pair remained dead-locked after the first playoff hole, but when Nakajima holed out for birdie on the 18th the second time around, he claimed the title.

“To be able to go head-to-head against him is truly an honor,” said Kho, whose runner-up finish represents the best ever for a player from Hong Kong. “It was really nice seeing him play these last two holes and he’s the best in the world. It just motivates me because I feel like I’m not that far off.”

‘Have the balls to say I’m doing this for money:' Justin Thomas opens up on LIV