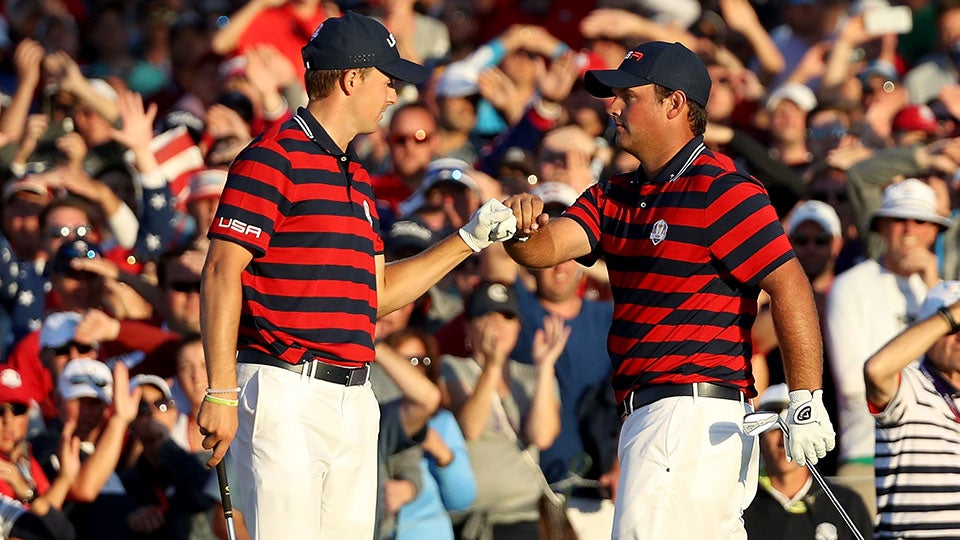 Jordan Spieth and Patrick Reed of the United States react on the 16th green during afternoon fourball matches of the 2016 Ryder Cup at Hazeltine National Golf Club.
Getty Images

Jordan Spieth had a front-row seat to Patrick Reed’s Ryder Cup heroics last month at Hazeltine National. The fist-pumping, the celebrations, the screams, Spieth was there for it all. He sat down with the No Laying Up podcast and was asked about some of his favorite Reed stories from the event. And Spieth did not disappoint. Below is a sampling of the memories Spieth has from his time with Reed wearing the red, white and blue.

You can listen to the full podcast here.

– On their first match in the 2014 Ryder Cup: “The first thing I remember about him from the Ryder Cup was when we played our very first match together against Ian Poulter and Stephen Gallacher in Scotland. We were on the fifth hole and were playing best-ball. We were 1 up, I think, early, and they’re both in trouble. I hit it on the left side of the green, about 30-40 feet away. Patrick is last to hit, and he’s like, ‘What do you like here?’ I’m like, ‘Dude, 25 feet left here and we win the hole.’ He’s like, “No, no, no. I’m going right at the stick. I don’t want to beat them by one, I want to thump them.” Sure enough, he goes at the pin and comes up short, and I’ve got a five-foot slider to win the hole. It’s stuff like that when he sticks the knife in.”

– On having Tiger as vice captain at Hazeltine: “We had a good moment with Tiger. We were playing No. 6, he hit his tee ball out there and we’re walking with Tiger out to the ball. And we had not missed a shot yet, and we’re 3 up on Sergio and Rafa.  I said something like, ‘Man, Tiger, you’ve never been able to play this good in alternate shot in your life.’ And he says something smart back. Patrick says something back to Tiger, and Tiger says, ‘Don’t worry Patrick, you only need 74 more wins and 14 majors.’ And then I said, ‘Patrick, you can’t talk s–t to him because you can’t talk s–t to me. You need two more majors and four more wins to get to me.’ Of course, it’s that kind of talk that gets him going. It was a funny moment with Tiger because you don’t hear him talk about everything he’s done.”

– On wanting to play all five matches in the 2016 Ryder Cup: “Tiger had told us ahead of time, if you guys get off and run in alternate shot, you’re playing again. And we took care of that. We ended up blowing the lead to the Spaniards, and it stings me still, but we were 4 or 5 up. He came up on the 12th tee and told us we were going back out in the afternoon. We knew we could play our way into five matches.”