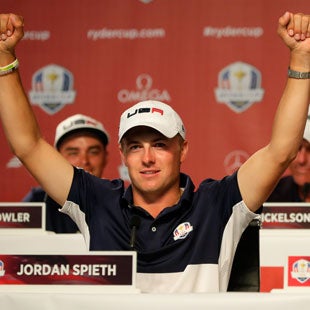 SPRINGFIELD, N.J. — Jordan Spieth got into some trouble when his drive on the par-4 7th hole missed the fairway and went into a puddle on the cart path during the second round of the PGA Championship.

From there he had to figure out how to make a correct drop from casual water on a cart path, and he and a rules official had a lengthy conversation that was broadcast on TNT. The dialogue between Spieth and the official was fascinating—it’s amazing how much goes into a simple drop—and frustrating, because it might be things like this that casual golf fan don’t have time for, or care for.

Still, the gallery enjoyed the lengthy conversation, which included some very funny back-and-forth from Spieth and the official. Spieth bogeyed the hole and dropped to three under.

Watch some of the highlights below:

‘Best drop I’ve ever done in my life.’ #PGAChamp https://t.co/MenKt4uhED