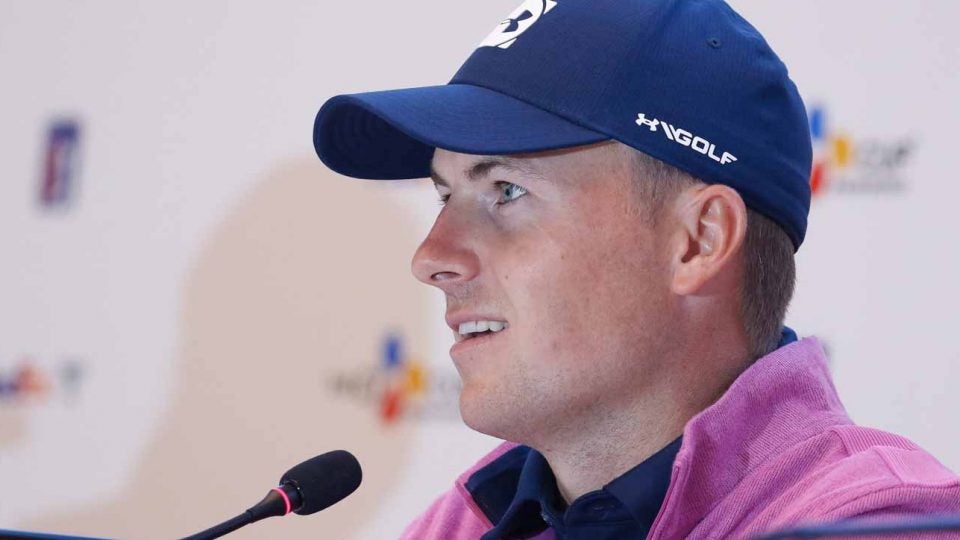 Jordan Spieth is hoping for a positive start to the 2019-20 PGA Tour season.
Getty Images

Jordan Spieth may have had a couple uncharacteristically down years, but there’s no questioning his star power. The three-time major champion arrived in South Korea on Monday alongside Justin Thomas to plenty of photos, fanfare and a few questions about his upcoming PGA Tour season.

Spieth’s CJ Cup appearance marks his first start in Asia since 2016, but said his appearance was dictated in part by the setup of the new schedule, which places more emphasis on the fall events.

Spieth said Thomas, his travel buddy, had highly recommended the event — and added his own positive impressions after seeing the course.

“The golf course is immaculate, it’s really fun,” Spieth said. “I like the imagination that’s needed on it, hitting shots in the wind, and then obviously the very undulating and difficult greens.”

Spieth begins his season at World No. 38, a far cry from the top-5 form he regularly displayed from 2014-2017. He hasn’t won since the 2017 Open Championship, and sketchy ball-striking combined with inconsistent short putting has plagued him over the last two years. For the first time since 2013, Spieth is unlikely to be chosen to represent Team USA at the upcoming Presidents Cup — although a strong showing this week would at least get him on Captain Tiger Woods’ radar.

But Spieth laid out his goals moving forward and didn’t mention the Presidents Cup a single time, focusing more on the process of tackling the upcoming season, the major championships in particular.

“My goals are pretty personal right now,” he said. “So I certainly want to get back in the winner’s circle, it’s been a little while, and I would like to be more consistent this year, being able to tee it up on Sundays with chances to win more consistently — and that comes from better ball-striking.”

News
Inside the Frat House: Why six American stars are roommates at The Open

Even when Spieth’s putting had dipped from its superhuman peak of 2015, he’d been able to rely on steady ballstriking to keep him among the world’s best; in 2017 he gained the second-most strokes on Tour approaching the green. In 2018-19, that rank slipped all the way to 145th, even as his putting skyrocketed back to 2nd. Most notable were his weekend showings. He was elite on Thursdays (9th in scoring average) and Fridays (1st) but morphed into a different player on Saturdays (170th) and Sundays (187th). That’s a trend he’s obviously looking to address.

“Each part of my game at different points in my career has been towards the top of the PGA Tour at different times and sometimes at the same time. So I know that I’m capable of doing it, it’s just a matter of the normal ups and downs of the game and addressing them and quickly turning the downs to ups and then maintaining when those parts of the game are on top,” he said.

Tournaments
Tour Confidential: Should Tiger pick Phil for the Presidents Cup team? (And will he?)

As far as specific goals, Spieth said he’s not seeking to regain world No. 1 status, but instead focusing on putting himself in contention, especially at the major championships.

“I don’t have a set number of wins,” he said. “For me, it’s more about the consistency, giving myself opportunities, and then certainly having a chance to win two or more of the majors on the weekend, that’s always been my goal.”

Spieth has always had a nose for the majors; even while off-form his last two seasons, his best results have come at majors including a T3 finish at Bethpage this year. In all, Spieth was optimistic for the year ahead. Why not?

“I’ve been working hard on my tee-to-green game to get it back on track where it’s been before, and when that gets cleared up, which it feels like it’s close to being done, then should present some more weekend opportunities with chances to win golf tournaments,” he said. His competitive season will begin Thursday in the 78-player field at Nine Bridges Golf Club.

How to watch the FedEx St. Jude Championship on Friday: Round 2 TV schedule, streaming
Go to mobile version