Tour Confidential: Should Tiger pick Phil for the Presidents Cup team? (And will he?)

Check in every Sunday night for the unfiltered opinions of our writers and editors as they break down the hottest topics in the sport, and join the conversation by tweeting us @golf_com. This week we discuss Presidents Cup captain’s picks, a bulked-up Bryson DeChambeau, slow-play stigma and more.

1. Phil Mickelson has played on 24 straight Ryder Cup or Presidents Cup teams — qualifying for 20 — yet he’ll be among those who need a pick from Captain Tiger Woods to make the Presidents Cup team that’s heading to Australia in December. Mickelson’s in the field at this week’s CJ Cup in South Korea, but should his middling play continue — he hasn’t had a top 10 since he won the AT&T Pebble Beach Pro-Am in February — he could put himself in a tough spot. Should Woods pick him for the Presidents Cup team, and will he?

Sean Zak, senior editor (@Sean_Zak): No he shouldn’t and no he won’t. I’d be willing to forget about Mickelson’s struggles from March through the FedEx Cup if he came out refreshed this fall and played like a top-20 player again. He just hasn’t. A missed cut at the Safeway (which he generally plays well at) and a 61st-place finish in Vegas are not good enough for Woods to even consider him. [This will also make it easier to appropriately rate Mickelson for next year’s Ryder Cup. Consider it a reset.]

Josh Sens, contributor (@JoshSens): The past doesn’t have to be a precedent. Phil’s had a great run, but all things come to an end. He’s been off his game. Sentimentality would be the most compelling reason to pick him, but I doubt Tiger is feeling especially sentimental about this.

Dylan Dethier, senior writer (@dylan_dethier): Mickelson should be on the team — as a vice captain! With so many tempting American options, there’s no way to defend Mickelson as a playing member of the squad.

Josh Berhow, managing editor (@Josh_Berhow): So I had this whole thing typed out saying I think Tiger will take Phil, and then I realized that I also think Tiger is going to pick himself, and then all of a sudden that’s only three picks he can make and, well, sorry Phil. That’s too much of a reach right now. 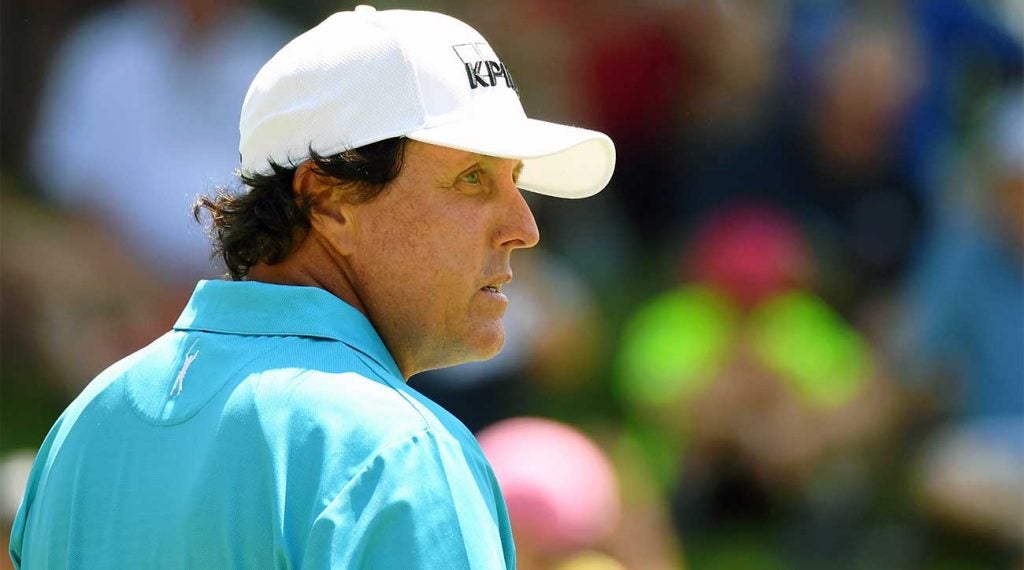 Phil Mickelson has slimmed down of late, but top results haven't yet followed.
USA Today

2. Mickelson’s not the only perennial Presidents/Ryder Cupper who needs to impress Woods. So, too, does Jordan Spieth, who hasn’t won since the 2017 British Open at Royal Birkdale, and who will make his 2019-20 season debut at the CJ Cup. Same question: Should Tiger pick Spieth, and will he?

Zak: No he shouldn’t and no he won’t. Again, the form has not been present. The easiest thing for Tiger to do is to look at the players who have played best and best recently. Feels obvious, I know, but when the Americans lose, Woods should be able to say he chose the best captain’s picks, not just the people who have been there before.

Sens: What Sean said. No one doubts Spieth’s fire, but many other great players have been in far better form.

Dethier: Spieth could change the conversation this week if, say, he wins the CJ Cup. Short of that, I don’t see it. He was better than people think in the latter half of the Tour season — but still not quite good enough.

Berhow: I changed my mind again. Jordan’s in! I’ll explain more later (in the next question), but he was much better the last 1/4 of last season, and he and Justin Thomas were 3-1 together in Paris. That might be enough to get Jordan on the squad.

3. Let’s finish what we’ve started. Acknowledging that there are a few starts left for players to boost their stocks, who, at this point, should Woods select with his four picks?

Sens: Finau, Fowler, Na and, because now’s as good a time as any to test out the young guns, Matthew Wolff.

Berhow: Finau (first man out after auto-qualifying), Woods (you know he wants to), Rickie (solid pick) and Spieth. At first I had this with Reed getting the pick over Jordan, but then I remembered everything that happened in Paris, and back then I wrote about how that could hurt Patrick if he ever needs a pick. Well, that time is now, and I think it will hurt him. This is still somewhat of a popularity contest with these things, and Spieth might get the nod over Patrick. (And then let’s just hope Patrick live tweets the whole Cup.)

4. Bryson DeChambeau is 26 years old, 6-1 and 205 pounds, but he plans to get “bigger” and “way stronger” this offseason. He tied for 34th in driving distance last season (302.5 yards) yet said he’s going to hit it a lot farther next year. Pros bulking up (too much) has long been a controversial topic on Tour (right, Brandel?) but some still go down that road. Is Bryson playing with fire?

Zak: I don’t think so. Where Rory McIlroy has always had a smooth, buttery swing, Bryson has long had a strong, muscular swing. And DeChambeau isn’t bulking up in the same way as many people assume. If he follows Greg Roskopf’s training by the book, this is more of a strengthening up weaknesses type of decision. This isn’t simply adding weight via muscle. It’s more about dialing up a handful of muscles where it would benefit his swing.

Sens: As long as beefing up doesn’t come at the cost of flexibility, I don’t see the big deal. Golf fitness is hardly a dark art, and I’m sure Bryson will have some well established guru watching over his workout. The real risk comes when a player decides to change their swing to get longer. Down that path lie all kinds of wrecks.

Dethier: In my experience, most PGA Tour players are smaller in person than they look on TV — Rory McIlroy, Justin Thomas and Xander Schauffele come to mind. But Bryson is the opposite. The dude spends a lot of time in the gym but also just has a big frame. And I’m with Zak — I don’t think he really meant what he said about bulking up, Roskopf’s emphasis is on specific strength. This is likely nothing. (Side note: Spieth, Mickelson and Matt Kuchar are other members of Team Bigger In Person Than You’d Think, and Stewart Cink is the captain.)

Berhow: No. For how analytical Bryson appears to be, I’m sure he’s figured out the correct way to go about doing this. I think he just came across a little too aggressive in that press conference by saying he was going to get bigger and stronger and will look like a whole different person.

5. In our inaugural Anonymous Junior Golfer Survey, nearly every elite junior player said golf has a slow-play problem, yet almost none characterized themselves as slow. How much, if any, of golf’s slow-play problem — across all levels of the game — is rooted in golfers’ lack of self-awareness?

Zak: It must be a lot! Though I thought I was a fast player I recently played with someone twice as quick and it made me question my own pace. Can we blame these people for a lack of self-awareness? Only once the data points are provided — and I don’t see much of that happening.

Sens: In my experience, I’d estimate it at about an 80-20 mix. Around 80 percent are entirely oblivious to how slow they are and all the fidgeting going on around them. The other 20 are aware that they’re glacial, but they just don’t care.

Dethier: I’m not sure anybody is told that they’re slow! We should demystify this from the top levels of the game. The Tour could and should release some data on specific player speeds — every player should play at a pace that he or she can justify. Golf is not a fast game, but it should be moderately faster.

Berhow: I once was called the D-word — “deliberate” — and it still gives me nightmares. (I have plenty of excuses for that round, but no one wants to hear about that right now.) No one likes to be known as a slow player and I think it just needs to be taught at a younger age. It’s a skill. This is how you swing, this is how you putt, and this is how you prepare for your shot and get ready to hit while others are doing it. If you’re not conscious of it you’ll never get better.

6. Henrik Stenson finally parted ways with his trusty Callaway Diablo Octane Tour 3-wood, a club that’s been synonymous with the Swede’s name since he added it to his arsenal a decade ago. What’s one club (or accessory) in your bag that you can’t live without?

Zak: It’s a 2014 Adams Pro 20-degree hybrid. On Full Send, it goes about 240, but more importantly it gets me out of the rough everywhere. I will be worse off without it someday.

Sens: Until very recently, it was a bronze Ping Anser 2, the first and only putter I ever owned. But a few weeks ago it slipped out of my bag as I was walking home from the course in Oakland. Sniff. I suspect it’s on sale right now somewhere on the internet.

Berhow: My 2011 TaylorMade Burner Superfast 2.0 3-wood, complete with a grip that’s so overdue for a fresh one it’s frayed and unraveling from the bottom. I actually was digging deep on the web a few months ago trying to find the exact same model so I could have it with my other bag I keep at my parents’ house several states away, but alas, I got side tracked and never finished the job. Guess I know what I’m doing tonight.

Dethier: Every club in my bag is on permanent probation — I don’t want anyone getting too comfortable in there.