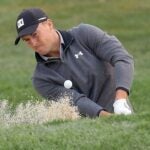 Jordan Spieth hits out of a bunker on the 18th hole at the Safeway Open on Friday.

Jordan Spieth stood over his 90-yard bunker shot. A 30-yard-high tree stood between him and the par-4 17th hole at the Silverado Resort and Spa North course in Napa, Calif. He could blast it out to the right. He could hook it around the tree. He hooked it. And it hooked right into the leg of a tripod television camera that was broadcasting Friday’s second round of the Safeway Open.

“Look out, everybody,” an announcer on PGA Tour Live said as the camera shook. The ball bounced off, and it helped him avoid falling into another trap, or worse. Spieth hit a flop shot from about 10 yards away from the hole, and it dropped in for a birdie. Positive.

Ten holes later, on the par-5 9th (Spieth had started on the back nine), Spieth stood over his tee shot on the 564-yard par-5. He was 4-under for his round and 3-under for the tournament, and the cut line would end up being 5-under. He needed an eagle. He got a tee shot right, near a fence and under trees. “Softly, softly, softly, real soft, softly,” he barked as the ball ended up a few feet from a hazard.

One swing later, his ball ended up a few feet into it. He could have blasted out to the left. He could have gone straight and below the trees. He went straight. And it went straight off a tree limb and was gone. “Oh my God. Did you see what it did?” Spieth said to his caddie as he took off his hat and laughed. He then lowered his head. He took a penalty, dropped and finished with a double-bogey 7. Negative.

The negative outplayed the positive. Again.

The double bogey left him with a 2-under 70 for the round and 1-under total for the tournament, and he was done. He’s played 10 events since the PGA Tour restarted in mid-June after its coronavirus hiatus, and he hasn’t finished better than a tie for 10th. Which came in the restart’s first event, the Charles Schwab Challenge.

The positive could outplay the negative. Again.

“I almost feel at times like the game is testing me a little bit right now because I feel really good about the progress I’ve been making, and then it seems like I’ll really have one brewing, and then I’ll get where I used to hit a tree and go in the fairway, it’ll hit a tree and go off the cart path out of bounds,” Spieth said before last month’s PGA Championship. “It just feels like I kind of here or there am taking some punches right now as I’m really progressing in the right direction. …

“I feel like you can look at it a couple ways. You can get really upset and complain about it, which I’ve done and that’s not helpful, or you can look at it like, ‘Hey, this is part of the game testing you, and the better you handle these situations, the faster you progress forward. …

“So that momentum, I assume, is inevitable, it’s just a matter of when. I’m in no hurry. I’ve got a lot of years in front of me and hopefully the best years in front of me. I just stay the course. I keep my head down, focus on what our team is trying to accomplish and work each day really, really hard. I’ve worked my butt off over the last year mentally, physically and mechanically. Things will start to come together. I believe it.”