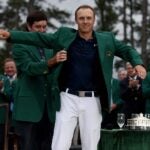 The Masters champions dinner is one of the many sacred traditions of Augusta National, and for many players, it is their favorite. The Tuesday before the Masters begins, all the past winners of the event gather for a dinner to welcome the previous year’s champion into their ranks. The champ selects the menu for the evening and mingles with fellow winners of the green jacket as they are inducted into the elite fraternity of Masters champions.

The event wraps up the year for a previous winner as he prepares for his title defense. And while every champions dinner is a special one, Jordan Spieth’s in 2016 might be among the best. As he explained on GOLF’s Subpar, his champions dinner was the last attended by Arnold Palmer before his death later that year.

“That was pretty awesome,” Spieth said. “So you get your menu, and everyone has one and you keep passing it around so everyone signs each menu. So it was the last one he put his signature on at the dinner. And I actually shared a locker with him there, too. So that (made it) double cool.”

Although Palmer was well enough to attend the Masters during his final year of life, there was still a sense that it would be the last he would ever make.

“It seemed like everyone knew,” Spieth said. “At one point in the night, everyone stopped. Ben Crenshaw is the host, and I think he stopped it and said, ‘Let’s all tell a story about Arnold Palmer and how he inspired us.’ And then went around the entire room. That was most of the dinner.”

Spieth told the story of his first Masters and having a conversation with Palmer and Jack Nicklaus, the two veterans imparting their Augusta National wisdom on the wide-eyed rookie. It was one of the only interactions Spieth got to have with Palmer, but the advice obviously paid off. Spieth won the Masters the very next year.

Check out the entire episode below as Spieth discusses his Ryder Cup dust-up with Patrick Reed, Bryson DeChambeau’s chances at the Masters and more.