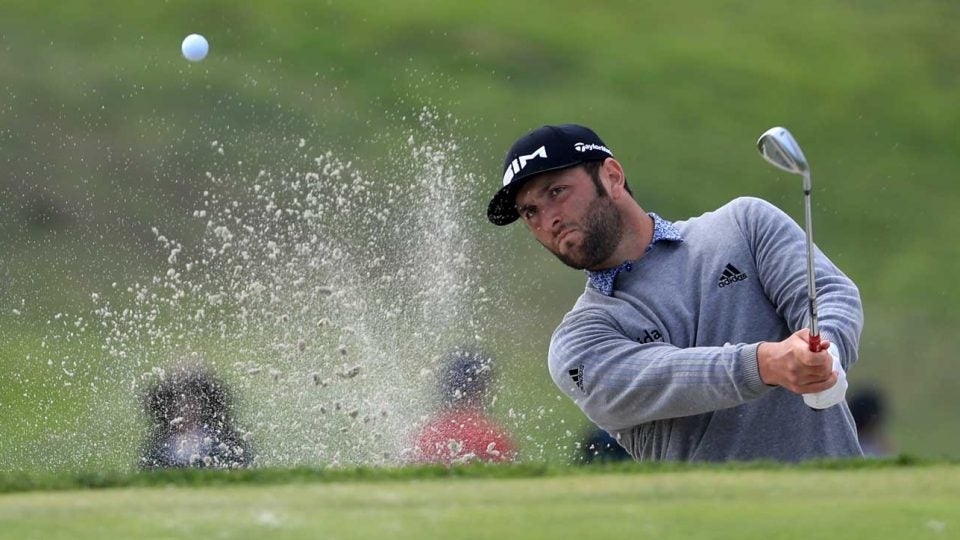 Jon Rahm pictured during the third round of the 2020 Farmers Insurance Open.
Getty Images

The third round of the 2020 Farmers Insurance Open saw a host of star golfers battling for the lead on Torrey Pines’ difficult South Course. Here’s everything you need to know, and everything you missed, from Saturday’s round.

It’s almost impossible to get off to a better start than Jon Rahm did on Saturday. He birdied the 1st and then holed out from 111 yards for a rare eagle at the par-4 2nd. That’s three under through two holes, in case you weren’t counting. The hot start moved Rahm to eight under, and he never looked back. More birdies followed at 6, 9, 13, and 16. The result was a round of seven-under 65, giving him a one-shot lead heading into the final round.

Tiger Woods began the day six shots off the lead, and by the time he was finished with nine holes, many wondered whether it was his tournament to lose. Unfortunately for Tiger, the momentum came to a halt on the back nine. He made his lone bogey at the 11th hole and failed to make a single par coming in. He did, however, drain a clutch 15-foot par putt on 18 to keep his hopes of an eighth Farmers Insurance Open title alive.

McIlroy aims for No. 1 ranking

A resurgent Rory McIlroy continued his recent torrid pace with a solid round of 67 on Saturday. McIlroy, who won Player of the Year honors last season, made six birdies and one bogey on Day 3, leaving him three shots off the lead. If he were to win on Sunday, Rory would reclaim the No. 1 spot in the Official World Golf Ranking.

Ryan Palmer was the leader when the sun rose over a foggy Torrey Pines on Saturday morning, having shot a 62 in the second round. There were moments when it seemed Palmer was destined to plummet down the leaderboard, but he grinded through his round to end up with a one-under 71. He may have lost his lead, but he’s still in great position to give it a go on Sunday.

‘How can you not love this man right here?’ What Tom Kim’s magical day felt like