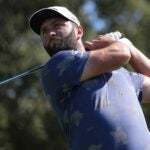 Jon Rahm was a model of consistency in 2021.

You could say that the top-10 finish, so often lauded, is an arbitrary thing, but what would you prefer? Top-8 just doesn’t have the same ring to it. Moses got famous off the original Top-10 list, and David Letterman took it to new heights. The Top-10 list. In golf we’d really say, the Top-10 and ties.

While we’re at it, let’s nod to Lucas Glover’s appearance on Letterman, after winning the 2009 U.S. Open and reading a Top-10 list of the Ten Things Lucas Glover Wanted to Say After Winning the U.S. Open. No. 1 on the list was this keeper: “Even I have never heard of me.”

On the PGA Tour, a top-10 finish by a player with no or limited playing status gets him into the next week’s tournament, or at least most of the time. In the typical caddie-player arrangement, the caddie gets 5 percent of a player’s winnings each week, but that number goes up to at least 7.5 percent for a top-10 finish. There it is again.

It was an interesting year for the majors because the last three of them were played on seaside or oceanside courses without many trees, while the inspiration for Augusta National was an inland version of the Old Course, famous seaside course in St. Andrews, Scotland. Bobby Jones, the co-designer of Augusta National with Alister MacKenzie, used to like to talk about that inspiration, and Jack Nicklaus, who knew Jones, still does.

But there have also been many years, over the years, where the four venues for the four majors have been wildly different, each from the other. The style of the courses. The firmness, or softness, of the playing field. The weather. It takes a lot of mental flexibility, and physical talent, to go from very different major events in a four-month period. And now, since the PGA moved from Augusta to May, a three-month period. It used to be American players would go to the British Open and play the so-called small ball, but that was a long time ago. Still, another wrinkle.

The four Grand Slam events of the tennis season — the Australian Open, the French Open, Wimbledon and the U.S. Open — have a similar quality. You might be a terrific clay-court player at the French Open, but not have the speed for Wimbledon’s grass. Even the hard courts of the Australian Open and the U.S. Open are different. The ball skips more in Australia and bounces higher in the U.S. This year, Novak Djokovic won in Australia and France and at Wimbledon, and lost in the final of the U.S. Open. Still, how’s that for top-tenning your way through the year?

Brandon Martin, a golf-history buff who lives in Norman, Okla., inspired by Rahm’s achievement, did some interesting research. He compiled a list of all the male golfers who have had top-10 finishes in the four majors, at least since 1960. He chose 1960 because that’s the year that Arnold Palmer, in cahoots with the Pittsburgh sportswriter Bob Drum, came up with the concept of the modern Grand Slam. (It’s very possible that Drum’s name should come first in that preceding sentence.) Arnold had won the 1960 Masters and the 1960 U.S. Open at Cherry Hills. He and Drum were flying to Scotland for the British Open when they talked about this modern Grand Slam. Yes, refreshments were served.

By the way, and just to save you the time: Ben Hogan never had a year where he even played in all four majors. In 1953, he won the Masters, the U.S. Open and the British Open, but didn’t play in the PGA Championship. The PGA then was a match-play event and ran from July 1-7 that year. The ’53 British Open started on July 8.

In any event, with a tip of the cap to Mr. Martin, here is the list of the players who have had top-10 finishes in the Grand Slam events in a single year, and the year or years in which they did it:

How about that 1975? Augusta had Bermuda-grass greens, and they were wicked. The U.S. Open was a Medinah, and you had to thread the needle from start to finish. The British Open was at Carnoustie, and it was cold and hard and nasty. The PGA was at Firestone and the course was long and soft. You talk about your different surfaces. Well, Tom Watson, Hale Irwin and Jack Nicklaus seemed to handle it well enough. That’s the only year as many as three players all had top-10 finishes.