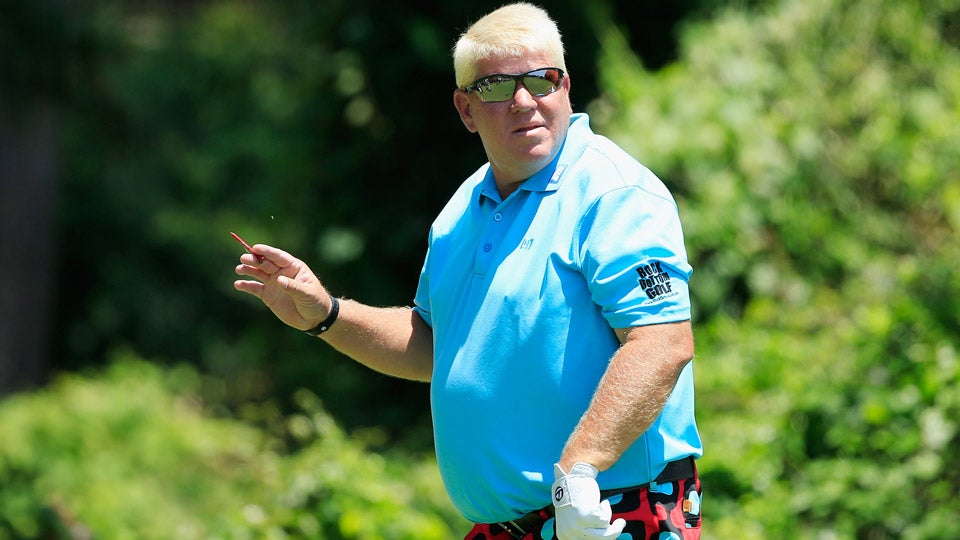 John Daly during his first round on the Champions Tour.
Getty Images

THE WOODLANDS, TEXAS — John Daly was officially welcomed to his new Champions Tour home Friday afternoon at the Insperity Invitational at The Woodlands Country Club with plenty of praise, laughs and a few flashes of the stellar play that made him a two-time major championship winner and fan favorite.

Add multiple cigarettes, several cans of diet coke and hundreds of fans, volunteers and tournament officials all wearing Daly’s signature Loudmouth pants on the sunny Southeast Texas links and you have an opening day only he could produce.

“I feel good, I feel nervous,” Daly said after his first nine holes in his first Champions Tour event. “It’s a good nervous. I always feel a little nervous on the golf course and that’s a good thing.”

But before Daly could get too nervous, his friends and tournament officials made sure he had plenty to laugh about.

Daly, wearing a bright turquoise blue shirt and red and turquoise Loudmouth pants, was greeted by cheering crowds on the first tee and presented with a large red and white sheet cake with the inscription “Welcome to the Champions Tour.” “You want me eat all this now,” Daly asked. “I’m worried what would happen about the fourth hole.”

“You see this golf ball,” Peter Jacobsen said holding up a lime green golf ball. “It’s the color of John’s teeth (after all his cigarettes).”

Fuzzy Zoeller offered a huge bottle of his namesake vodka to pay off the bet he once made with Daly that his wild living meant he would never reach 50.

“There is it, I’ve paid my debt,” Zoeller said.

When it finally came time for golf, Daly, hitting last, showed he had lost none of his long driving talent.

He blasted his opening drive on the 516-yard, par-5 opening hole at least 80 yards past his partners, put his second shot over the green, chipped back and then two-putted for par.

After seven straight pars, including two missed birdie putts from inside 10 feet, Daly bogeyed the par-4 seventh hole, then birdied holes eight and nine. He made the turn at one-under-par 35, which led his group of good friends Jacobsen and Zoeller. By the end of the round, Daly had reached two under, four shots off the lead.

Regardless of his score, it was clear he was the people’s choice, something that caught the notice of the other players as well.

“Hey, John, you see this shirt,” said one fan who grabbed his shoulder as he came off the second green, pointing to the Crooked Stick logo where Daly burst into the pro golf scene with a PGA Championship win. “I wore it for you, to give you good luck today.”

“I worked Arnold Palmer’s group for the last five years here, and I’ve never seen anything like this,” said a security guard assigned to Daly’s group.

Daly, who signed autographs walking from the putting green to the first tee and fist pumped and waved to fans on every hole, continued his down to earth ways to which thousands of golf fans can relate.

“John, I got a Miller Lite here for you,” said one already well-served patron as Daly walked past a concession line. “That’s OK,” Daly shot back without breaking stride. “I got one waiting on my bus.”

Instead when arrived on the third tee his caddy/fiancée Anna pulled a mini can of diet Coke out of his ball pocket, still with a plastic six pack ring on it, and poured it in an ice filled hard plastic 16 ounce mug with the script John Daly name on the side.

As the round continued, Daly was able to rehash stories with Zoeller and Jacobsen of PGA glories gone by and get some serious advice.

“One thing you have to do out here is pick your spots,” Jacobsen told Daly as they walked between holes. “Every course is not going to fit you. The putts always break when you least expect it and these guys can really play. Otherwise everything is the same.”

“I’ve known John since he was 18 years old and he likes people and his personality will draw out the crowd,” said Dallas’ Lee Trevino, who was making a rare appearance to see Daly up close and personal.

“He’s got the greatest short touch for a big man of anybody I’ve ever seen. I think he will grip it and rip and you can’t keep him out of the winners’ circle,” Trevino added “Unless he throws his putter or his whole bag in the water on the 18th hole.”

“They (fans) don’t want to come out and see me, a journeyman,” added Woody Austin. “I understand that. It’s important to have, what we call, needle movers, and that’s what John can do.”

For least one day, Daly said he achieved the only goal he set on his opening day — have fun.

Those friends, both inside the ropes and out, gave the newest rookie a Texas-sized affirmation of that fact.